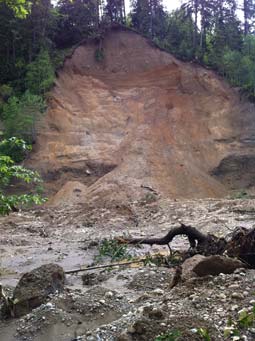 The primary purpose of this map is for use by the Department of Permitting and Environmental Review (DPER) in screening land use and building permit reviews for further geotechnical investigation, and to provide general information to the public and other government entities. As a result of the tragedy at Oso in early 2014, King County Executive Constantine and the King County Flood Control District directed departments to begin a collaborative effort to assess the nature and level of landslide hazards throughout the county. Of principal importance was completion of a map showing potential landslide hazards in unincorporated King County that could replace the 1990-vintage Sensitive Areas Ordinance landslide hazard mapping, which had become outdated. This map is one of the products of that effort and became available June of 2016.

Potential landslide hazards shown here include known slumps and other deep-seated landslides, debris fans, rock falls, rock avalanches, snow avalanche zones, undifferentiated and/or indistinct mass wasting features, and landforms suggestive of an increased landslide hazard. All of these features are mapped together irrespective of landslide type, actual hazard levels of individual features, history of past landsliding, and potential risk to structures and residents. This information is provided solely to counsel residents on the possible need for further investigation, such as prior to a proposal for new development.

For general guidance in using this map and specific questions, please contact:

The King County Department of Natural Resources and Parks has gathered landslide mapping information to assist it in its planning and implementation of capital projects, including flood-risk reduction projects, and in its programs that address flood-related hazards.

This information, gathered by the Department along the mainstem river corridors in King County, is also used for flood warning and emergency response purposes. Landslides along river corridors can deliver substantial quantities of debris into the river channel, thereby blocking the flow of water and producing flooding of homes, businesses and roads. Landslide hazard mapping information along river corridors was requested and funded by the King County Flood Control District. This information about landslide hazards will be used in combination with flood and channel migration hazard mapping to inform decisions regarding the construction of capital projects such as levee setbacks, and non-structural measures such as the acquisition of at-risk homes to reduce impacts on residential neighborhoods, commercial areas, and the public infrastructure that serves these areas.