Stream Blog for Miller and Walker Creeks: Observations from the Stream Bank During 2007 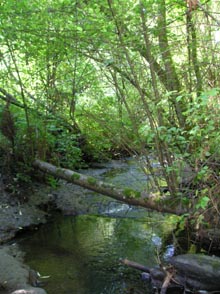 This Web page records observations of Miller and Walker Creeks from the people who live, work, and play alongside them. Observations from 2007 are on:

Date: December 3, 2007
Location: Miller/Walker Creeks through the basin in Burien and Normandy Park
Source: Dennis Clark, Basin Steward
Observation: Miller and Walker Creeks suffered some of the worst flooding in memory today as more than 4 inches of rain fell during a 24 hour period ending Monday afternoon. "Snake Road" above the Normandy Park Swim Club was closed due to Miller Creek flowing across the road. The field in front of the Cove (external link) clubhouse was nearly completely inundated with water from both Miller and Walker Creeks. There was other localized flooding throughout the basin. Photos below are by the Basin Steward except where noted.

Date: November 26, 2007
Location: Miller/Walker Creeks at the Cove (external link) in Normandy Park
Source: Andy Batcho
Observation: Saw 12 salmon in Miller & Walker Creeks today:
5 coho, all in Miller Creek throughout the length of the stream on the Cove property. All dead. 3 females, 2 males. All without adipose fins. (meaning strays [from other streams]; they are hatchery coho but not raised in in the Trout Unlimited Miller Creek hatchery….those fish are released as fry & fins are NOT clipped.) 4 to 7 lbs. One female spawned out, the rest had not spawned or had not completely spawned.

7 chum salmon in Miller & Walker Creeks. All alive. Two, a pair, female digging a redd, in Miller Creek 50’ below Walker confluence. Three near the mouth of Miller Creek working their way upstream. One in the beaver pond inlet stream, 40’ below the inlet from Walker creek. One in Walker Creek downstream of the tennis courts, moving quickly upstream.

Also saw a piliated woodpecker working one of the dead snags behind the building, along Miller creek.  Don’t see them too often.

Date: October 27, 2007, 9 a.m. - 1 p.m.
Location: Miller Creek at S. 144th Way in Burien
Source: Dennis Clark, Basin Steward
Observation: Today was the second of two days of volunteer stewardship of a 300 foot stretch of Miller Creek in northeastern Burien (see entry below for day one). Volunteers included about 46 people from across the Highline community. The local political leadership got their hands dirty, too: Mayor Joan McGilton, Deputy Mayor Rose Clark, and Councilmember Sue Blazak from Burien; Mayor Shawn McEvoy, Mayor Pro Tem George Hadley, and Councilmember Clarke Brant from Normandy Park; and Councilmember Chris Wythe from SeaTac. (All three cities jointly fund basin stewardship along with King County and the Port of Seattle.) Working on the south side of the stream, the volunteers grubbed blackberry and planted 110 trees and shrubs, including spruce, cedar, cottonwood, and red osier dogwood. The action was captured by Matt Wilkins from Puget Sound Access. As the trees and shrubs grow, they will further shade the creek as it flows through this City of Burien property. Insects will fall in the stream from the vegetation, providing food for juvenile salmon. There will be more volunteer opportunities at this site in 2008. The work at his property was funded in part with a grant from the King Conservation District (external link) and Southwest Suburban Sewer District (external link) donated compost. Thank you to all the volunteers who helped on both days!

Date: October 26, 2007, 8 a.m. - 2 p.m.
Location: Miller Creek at S. 144th Way in Burien
Source: Dennis Clark, Basin Steward
Observation: Today was the first of two days of volunteer stewardship of a 300 foot stretch of Miller Creek in northeastern Burien. Juvenile hatchery salmon are outplanted in this stream and the restoration was to replace non-native, invasive plants such as Himalayan blackberry with native trees and shrubs. Volunteers included about 50 students, teachers, and chaperones from Highline High School (external link), organized by teacher Judy Chambers. Working alongside them were 25 members of the new Washington State Veterans Conservation Corps (external link), led by program manager Mark Seery. Working on the north side of the volunteers grubbed blackberry and planted 180 trees and shrubs, including spruce, cedar, cottonwood, and red osier dogwood. They picked up a large amount of trash as well.

Date: October 25, 2007, 5 - 6 p.m.
Location: Miller/Walker Creeks at the Cove (external link) in Normandy Park
Source: Andy Batcho
Observation: Weather clear, tide high, stream flow up a bit. I saw 5 salmon in Miller Creek this afternoon, below the confluence with Walker Creek.  They were hard to spot, I heard them first.  They’re hanging out in the deep pools and it takes much patience to observe them swirling in & out of the pool.  I think they’re Coho, but the lighting wasn’t the best & they didn’t give me much time to identify the species.  They may be Chum, but the size tells me they’re Coho? I saw no salmon jumping in the saltwater at the mouth of the stream. I did observe 3 large fish swirl & heard one other jump with a large splash in the Pond.  I couldn’t get a very good look at them, but these are likely salmon…..if not, they are HUGE Cutthroat.

Date: October 23, 2007
Location: Miller Creek at the upstream end of the Southwest Suburban Sewer District (external link) plant in Normandy Park
Source: George Ritchotte, Washington State Department of Transportation
Observation: At the upper end of the sewage treatment plant we saw a chum carcass, and towards the lower end a coho carcass as well as a pair of live spawning coho.

Date: October 12, 2007, 6:30 p.m.
Location: Miller/Walker Creeks at the Cove (external link) in Normandy Park
Source: Andy Batcho
Observation: Tide near high and outgoing. I observed a large (possibly 50-100) school of salmon (too dark to tell if they’re Coho or Chum, but they are LARGE!) at the mouth of Miller creek in saltwater tonight.  They were jumping everywhere! Not sure if they’re bound for Miller Creek or just passing by, but they seem to be hanging out at the creek mouth, so hopefully they’re our fish. Also not sure if they’ll come in tonight, or are just “ripening “ and waiting for the next rain to move in.

Date: October 3, 2007, 7 - 8 p.m.
Location: Miller/Walker Creeks at the Cove (external link) in Normandy Park
Source: Andy Batcho
Observation: Tony Cassarino & I went up Miller Creek this evening to see if we could find the source of the muddy/turbid water. We checked the new settling pond at 1st Ave. [in Burien], it was dark brown water not clear water. We checked Miller Creek as it crosses Ambaum…although we couldn’t see to well, the water looked dirty. Then we checked upstream at the bridge that goes to the north end of the airport….water was dirty there also. Then went up to about 142nd, (old horse pasture that is now filled and a construction project), with a flashlight we could see that the stream was pretty muddy there also. We followed the stream up to Arbor Lake, there was no/little water flowing from Arbor Lake, but I’m sure the Hermes & (other) depressions were pumping lots of street runoff into the stream given all the rain today. The place to see the definite contrast in water color is at the mouth of Miller / Walker.  Walker is tannic color, but clear, Miller is dirty.

Date: October 3, 2007, 3 p.m.
Location: Miller/Walker Creeks at the Cove (external link) in Normandy Park
Source: Andy Batcho
Observation: Rained hard last night & today. Walker Creek is running high, clear / tannic color. Miller Creek is running very high & muddy.  Doesn’t appear to be “fresh” mud, like Walker Creek on September 30, darker color mud.  Didn’t trace the source of the muddy water. Come to think of it, when I drove by the new detention pond on 1st Ave., [I saw it] has muddy looking water in it, similar to the off color Miller Creek. 4 Coho observed to date on Cove property.

Date: Week of September 17, 2007
Location: Miller Creek upstream of Southwest Suburban Sewer District (external link) plant in Normandy Park
Source: Pretty much everyone in Highline
Observation: If you lived in southern Burien or northern Normandy Park, you couldn't miss the big helicopter flying back and forth above Miller Creek for a several day period in mid-September. The helicopter was being used to move construction equipment and supplies to help repair a sewer line that runs parallel to Miller Creek. Use of the helicopter reduced impacts to the stream and the vegetation alongside it. Prompt repair of the line by the sewer district avoided a potentially catastrophic failure during the winter months.

Stewardship of the Miller/Walker Creeks basin is jointly funded by the City of Burien, City of Normandy Park, City of SeaTac, King County, and the Port of Seattle. On behalf of the partners, this page is proudly hosted by King County Department of Natural Resources and Parks - Water and Land Resources Division.