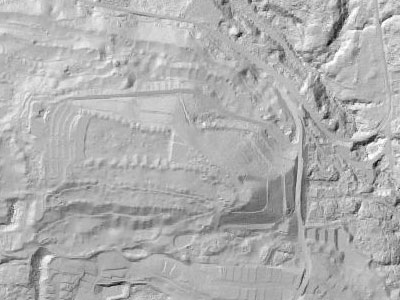 The grayscale, shaded-relief depiction of the earth's surface in this map viewer represents data that was collected by lidar—an aerial remote-sensing process in which pulses of laser light from instruments in flight are directed downward and their reflections are recorded and analyzed. Like radar, which uses radio signals rather than laser light, lidar measures distance by detecting the amount of time it takes for each reflected pulse to return to its source.

By combining the distance that each pulse has traveled with GPS and other flight data that precisely fixes the aircraft's position at any moment during its flight, the horizontal and vertical position of every point on the ground that reflects a laser pulse can be calculated. The high frequency of light pulses inherent in the technology (many thousands of pulses per second) enables a high-density, three-dimensional network of points―a "point cloud"―to be created for a lidar-scanned area. The point-cloud data can then be used to create a digital ground elevation model (DGM) that has more detail than can be produced by other remote-sensing methods, such as stereo photogrammetry.

The shaded-relief image in the King County Lidar Swipe map viewer was derived mathematically from a DGM by calculating the intensity of simulated sunlight reflected from calculated ground-slope angles. This particular DGM, which has a resolution of approximately 6 feet per pixel, was made primarily from a mosaic of lidar data that was collected over King County and southwest Snohomish County from 2001 through 2004 by various agencies, including the Puget Sound Lidar Consortium and King County. The DGM includes supplements and revisions made from lidar data collected for specific study areas in 2007 and 2009–2012. Even newer data is being added in an ongoing effort to ensure that every part of the geographic extent of the DGM is represented by the best and most current data available for that location. 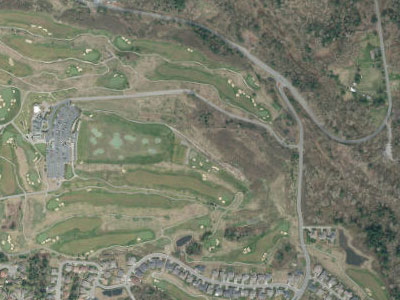 NOAA Ocean Facts: What is LIDAR?