Diffuse authority and loose coordination among local funders make it difficult for the regional homeless response system to adjust and respond to the needs of the growing number of people experiencing homelessness in King County. The main local funders of homeless interventions are the City of Seattle, King County, the King County and Seattle Housing Authorities, and private foundations. The City and County separately manage their funding and contracting processes, presenting administrative and operational burdens for homeless housing providers. Having many large organizations working independently also reduces the ability of the region to respond collectively to community needs, and creates roadblocks to change. All Home is a coordinating body meant to pull together local funders into a homeless response system, but it lacks the authority to do it. 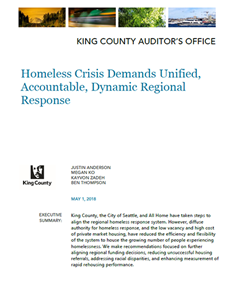 The Department of Community and Human Services (DCHS) manages the local coordinated entry system (CEA), but scarce housing and communication barriers have led to extended waits for housing through the system. Unsuccessful housing referrals are common, and, at times, disproportionately affect the most vulnerable. CEA has expanded its outreach, but racial disparities remain.

Local funders have increased investments in rapid rehousing (RRH). However, the limited number of affordable rental units has likely contributed to substandard RRH performance, with fewer than half of RRH enrollees moving into housing while participating in the program. While move-in rates have improved in 2017, more consistent tracking and analysis of data to identify potential housing barriers could improve these results. 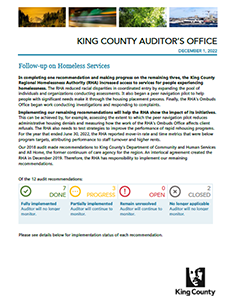 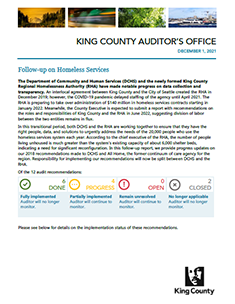 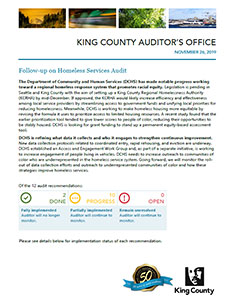 Justin Anderson, Megan Ko, Kayvon Zadeh, and Ben Thompson conducted this audit. If you have any questions or would like more information, please call the King County Auditor's Office at 206-477-1033 or contact us by email KCAO@kingcounty.gov.