Our analysis of data from the King County Sheriff’s Office shows racial disparities in the numbers of arrests and uses of force, as well as potential to expand alternatives for responding to low-risk calls. King County Code and data systems constrain how regularly the Sheriff’s Office collects racial demographics for calls for service, limiting its ability to proactively identify racial disparities. We recommend that the County take steps to reduce racial disparities in policing by collecting and analyzing data on all calls for service where an officer stops a member of the public. We also recommend that the County use lessons learned from other large metropolitan areas to increase the chances of success for a pilot of policing alternatives. 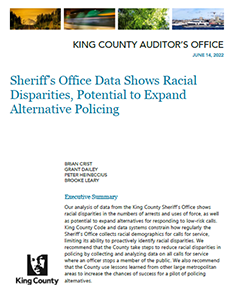 The Sheriff’s Office is the primary police force for all unincorporated areas of the county and for 13 contracted incorporated areas, covering a combined population of over 500,000 people. The Sheriff’s Office also provides services to Metro Transit, Sound Transit, an airport, and marine areas. Each year, the Sheriff’s Office receives around 150,000 dispatched calls for service and officers initiate another 200,000 calls. How officers interact with the community during these calls can have profound impacts on both the individuals involved and the public at large.

The King County Sheriff’s Office records a variety of information about its 350,000 calls for service each year, including both dispatched 9-1-1 calls and officer-initiated calls. However, information on the racial identities of community members stopped during these interactions is only available in around 4 percent of calls. King County Code may limit when officers may collect data on race. In addition, the data entry system for calls lacks a field for entering race. However, an officer’s perception of a person’s race is key to analyzing racial disparities in policing, which are a problem nationwide.

We found racial disparities in the numbers of arrests and uses of force, where the Sheriff’s Office does collect data on race. People and officers reported Black people as suspects and officers arrested Black people at rates nearly four times higher than expected given their proportion of the county population. Few calls resulted in uses of force, however we found that, overall, White officers as a group used force twice as often as Black or Asian officers. Additionally, both Black and Hispanic people were subjected to uses of force more often than White people. While the Sheriff’s Office has improved its analytical capabilities, leadership has stated that it lacks the capacity to analyze race data even if collected. Contract partners that we spoke with said they would benefit from increased data analysis and sharing from the Sheriff’s Office.

Other jurisdictions across the nation have developed alternative models for responding to some types of calls for service. We compiled best practices and lessons learned from four cities which have implemented these programs.

We ask Council to consider changing code to allow for broader data collection and recommend that the Sheriff’s Office collect data on perceived race for all calls for service and that the County Executive analyze it to identify and reduce racial disparities.

Brian Crist, Grant Dailey, Peter Heineccius, and Brooke Leary worked on this audit. If you have any questions or would like more information, please call the King County Auditor's Office at 206-477-1033 or contact us by email at KCAO@kingcounty.gov.