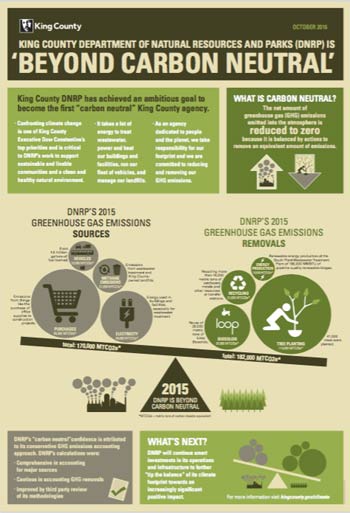 As an agency dedicated to people and the planet, the Department of Natural Resources and Parks (DNRP) is committed to climate action and is taking responsibility for its greenhouse gas (GHG) emissions.

Following through on commitments in King County’s 2015 Strategic Climate Action Plan, DNRP announced in the fall of 2016 that it has achieved "carbon neutrality" a year ahead of schedule by removing or reducing more GHG emissions than its operations create.

DNRP consumes a lot of energy to accomplish its mission to provide regional parks and trails, protect the region’s water, air, land, natural habitats and historic properties, and reduce, safely dispose of and create resources from wastewater and solid waste. Operating DNRP’s wastewater treatment plants and pump stations alone account for more than half of all King County government’s facility energy usage.

Using that energy creates GHG emissions that have an impact on the environment and climate. There are also GHG emissions associated with the goods and services DNRP purchases, and from the methane gas produced by its county-owned landfills and from the wastewater treatment process. At the same time, many DNRP programs remove or reduce GHG emissions, through actions like planting trees that consume carbon dioxide as they grow.

In his 2014 State of the County speech, King County Executive Dow Constantine announced the "DNRP Beyond Carbon Neutral" initiative – directing the department to become carbon neutral by the end of 2017. Since that time, DNRP underwent a comprehensive accounting of its carbon impact that identifies both how it is releasing and how it is reducing GHG emissions. DNRP has high confidence it is carbon neutral because its calculations were comprehensive in accounting for major sources, cautious in accounting GHG removals and improved by third party review of its methodologies.

DNRP will continue smart investments in operations and infrastructure to reduce and remove more GHG emissions than it generates.

This website provides details about DNRP’s efforts to become and remain "Beyond Carbon Neutral."

December 6, 2016
Natural Resources and Parks is the first King County department to make its operations and purchases carbon neutral

To learn more about DNRP's strategies to go Beyond Carbon Neutral, contact Matt Kuharic in the DNRP Director's Office.