As one of the largest transportation hubs in the Pacific Northwest, King County is home to major highways, air transportation, railroad operations, and a deep-water marine port. Growth and traffic issues in our region - including the exponential growth in the number of trains carrying highly-flammable crude oil and coal - continue to increase the risk of transportation accidents, making our area vulnerable to all types of transportation emergencies. 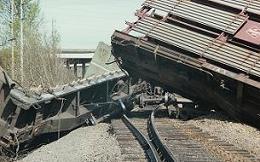 Highways: The central Puget Sound region is likely to experience a higher occurrence of crashes along our highways as congestion increases. Privately-owned vehicles and local bus services provide the primary means of transportation. Crashes often involve congestion, high speeds, and precipitation, especially during the winter months.

Air transportation: Seattle-Tacoma International Airport continues to see passenger counts rise as domestic and international airlines add flights. King County also hosts several smaller airports, such as Boeing Field/King County International Airport, Renton Municipal Airport, and others. Weather is a significant factor in air transportation accidents with downbursts, thunderstorms, and ice as the primary weather-related events that increase risk. Despite the large number of planes flying over heavily populated areas, the number of crashes involving people on the ground is quite small.

Rail transportation: Rail carriers in our region include BNSF Railway and Union Pacific for freight, Amtrak for passenger travel, and Sound Transit's Link light rail and Sounder commuter rail service. While an accident involving a passenger train traveling through our region could result in a mass-casualty incident, the greatest risk associated with freight trains is a spill of hazardous materials. The exponential growth in rail transport of volatile Bakken crude oil through our region has spurred changes in regulation, preparedness, and response planning at almost every level of government. For more information on hazardous materials releases, please visit the hazardous materials section.

Marine transportation: As with other modes of transportation, both passengers and cargo are transported by water in King County. The Washington State Ferry System provides the primary means of marine passenger transport, with four ferry terminals located in King County. In addition to Puget Sound, the region contains many smaller bodies of water which are vulnerable to shipping and boating accidents, as well as those involving ferries. Ferry accidents could result in mass casualty incidents while major emergencies associated with freight vessels are more likely to result from spills or collisions with passenger vessels.

How to prepare for transportation incidents

What to do during a transportation incident