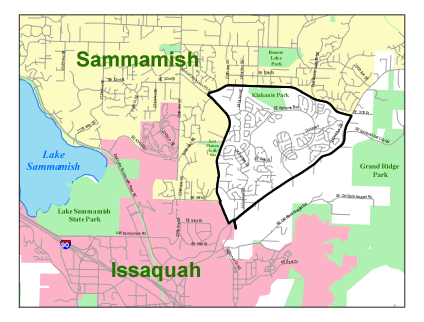 January 1, 2016 - Klahanie was annexed in to the City of Sammamish.

The City of Issaquah put the question of annexation to the voters of Klahanie and South Cove/Greenwood Point in the November 2005 general election. The voters in both areas overwhelmingly approved annexation, but the companion measure to assume the city’s outstanding indebtedness did not fare as well. While the debt assumption measure passed in South Cove/Greenwood Point, the measure did not receive the required 60% approval in Klahanie. As a result, the City of Issaquah will extend its borders to serve South Cove/Greenwood Point within the next year, while the future local governance of Klahanie is uncertain. While some Klahanie residents remain interested in joining Issaquah, there are others that would like to pursue annexation to the City of Sammamish. Both cities continue to study and review their annexation options.