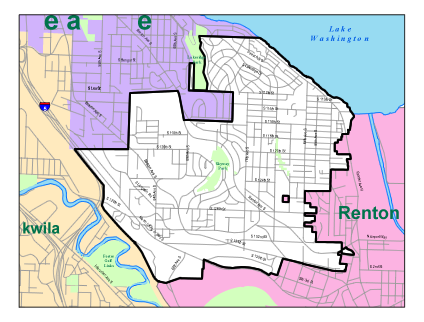 West Hill is part of the City of Renton’s potential annexation area (PAA), meaning Renton intends to extend its borders to serve this community through the annexation process.

West Hill is an unincorporated island bordering the southern end of Lake Washington, surrounded by the cities of Seattle, Renton, and Tukwila. It is comprised of the neighborhoods of Bryn Mawr, Lakeridge, Skyway, and Earlington.

Residents of the West Hill area submitted a petition for annexation to the city of Renton in the fall of 2008. King County Elections certified petition signatures in December 2008. The Washington State Boundary Review Board approved the City of Renton’s notice of intent to annex the Skyway/West Hill PAA in June of 2010. The City of Renton has scheduled a public vote in February of 2012, where residents will make a decision about governance transfer to the City. King County will continue to work with residents and the city to provide the information necessary for informed decisions about the future governance of the West Hill PAA.