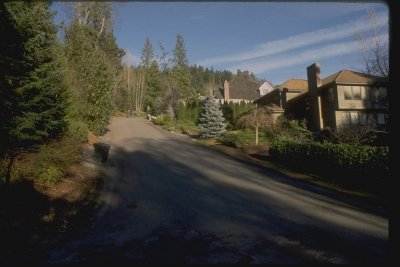 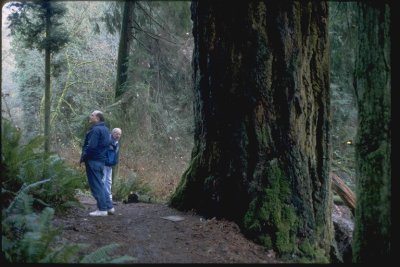 As part of the 1997 Budget, the Metropolitan King County Council requested that the Department of Development and Environmental Services (now known as the Department of Permitting and Environmental Services (DPER)), evaluate the existing zoning in the Holmes Point Planning Area. (Figure1) This report consists of a brief history of development, land use and zoning in the Holmes Point Planning Area, a description of the area's natural environment and other issues, a summary of three options for responding to these issues, a summary of the public process and community response to the options, and DPER recommendations. After further public input, these recommendations will be incorporated into the 1998 Executive Proposed Amendments to the King County Comprehensive Plan.

The earliest recorded activities of the first settlers were of lumbering, farming and trade undertaken for half a century starting in the 1860's.

Finn Hill was named for the Finns, such as the Tollber family and John Reuth who came to that area in 1869. The hill was first logged off in the early 1900's. Otto Reine bought 10 acres on Finn Hill (for $500), cut cedar and skidded logs to Juanita on a chute. The Lake Park Land Company constructed landings north and south of O.O. Denny Park and subsidized steamers to attract investors and land purchasers. (See Figure 2)

The Holmes Point Planning Area, located on the northeast shore of Lake Washington between St. Edwards St. Park and Juanita Bay, is part of the Northshore Community Plan area, which has been one of the fastest growing parts of King County (its population grew at an average rate of almost four percent per year during the 1980's).

The first iteration of the Northshore Community Plan and Area Zoning, adopted in 1977 zoned most of the Holmes Point area RS-15,000 (one home per 15,000 square feet, or about three homes per acre), with some RS-7,200 along the waterfront.

In 1993 the Area Zoning for Holmes Point as well as other parts of the Northshore Community Planning Area was amended to include special development conditions (P-suffix) that imposed requirements in addition to those in existing County development regulations relating to stormwater retention/detention, and the retention of significant trees. Residents of Holmes Point requested that the County consider downzoning the area, but the RS-15,000 and RS-7200 zoning was retained.

In response to the mandate of the Washington State Growth Management Act of 1991 King County undertook a comprehensive planning effort which culminated in revised zoning classifications throughout the County.

The 1994 KCCP contains written policy guidance for urban residential development, environmental protection and adequacy of public services, and a Land Use Map that designates the Holmes Point Planning Area as Residential, R-4 dwelling units per acre. The new Zoning Code's residential zones are density based rather than lot size based, and contain zones equivalent to all those in the old code except RS-15,000.

During the conversion process, DDES applied either R-1 (residential, one dwelling unit per acre, 50 percent clustering required), or R-4 (residential, four dwellings per acre) to areas previously zoned RS-15,000. The RS-15,000 zoning in the Holmes Point Planning area was predominately converted to R-4, the lowest density classification routinely given within within the Urban Growth Boundary Area. The RS-7,200 zoning was converted to R-6 ( residential, six dwellings per acre).

The Holmes Point Planning Area which includes the Champaigne Point district is the south portion of the Finn Hill premonitory with underlying soils of highly erosive unconsolidated glacial and non-glacial soils. (Figure 4) From the eastern boundary which is primarily described by Juanita Drive, the planning area falls west and south to Lake Washington and is characterized by steep forested slopes and ravines, from which springs and surface water collect, including the salmonid bearing class two stream, Denny Creek.

The study area encompasses the largest contiguous natural area on Lake Washington, most of which is in public ownership. There is a mosaic of second growth forest types which provide habitat for eagle, heron, owls, pileated woodpecker, coyote and a host of other wildlife species as well as a regionally significant recreational amenity. (Figure 3)

Residential development is characterized by three types of development characteristics. Fed by locally accessible arterials off Juanita Drive, the "crown" of hill residences lay out on relatively flat land and have a variety of street types that serve them. The two other characteristic types are served by the main arterial of Holmes Point Drive and are the "shoreline" residences, and residences that reach up the "ravines" via fingerling lanes serving houses on the flanks and flats, with some eventually reaching the ridges.

In response to constituent concerns over the impacts of the 1994 Comprehensive Plan upzone to R-4, King County Councilwoman Maggi Fimia conducted a public forum about protections available from existing King County regulations. (Note: the planning area is now in the council district of Councilwoman Jane Hague) The April 30 Forum presented county staff who discussed existing regulations regarding zoning, site planning, and incentive programs. A commitment was made to continue the dialogue about Holmes Point and the need to initiate a 1997 planning study which would look at land use issues. There was a discussion of future funding for the restoration of Denny Creek.

In July of 1997 a planning study was initiated to review community land use issues. Public meetings were conducted on September 17, October 23, and December 18, 1997.

Here is a summary of issues from the many comments gathered at the September 17 Forum:

The discussion of options focused mostly on possible changes to the R-4 zoning on the slopes above Holmes Point Drive between St. Edwards State Park and O.O. Denny Park. The southern part of the Holmes Point Planning Area between O.O. Denny Park and Champaigne Point has environmentally sensitive areas and would be within the scope of these options, although it has more R-6 than R-4 zoning. (Figures 5, 6, and 7)

The three options as described to the community are as follows with some explanatory text:

A. Keep Existing R-4 Zoning with greater community under standing and access to King County protections and services.
This is essentially the no-action alternative, although it could be combined with increased code enforcement, field inspections and technical assistance to applicants subject to the Significant Trees Special District Overlay (K.C.C.21A.39.220).

B. Keep R-4 Zoning but add an overlay district which provides more stringent disturbance standards.
This alternative would replace the current Significant Trees Special District Overlay with a lot by lot limit on site disturbance and impervious surfaces. The existing special requirements for stormwater retention remain in effect. In addition the overlay would provide more guidance to King County for granting variances, to encourage maximum protection of ground cover.

C. Downzone to R-1 in King County mapped sensitive areas, plus more stringent site disturbance standards.
This alternative would involve reclassifying to R-1 almost all of the R-4, and much of the R-6 zoning in the portions of the Holmes Point Planning Area accessed by Holmes Point Drive NE. This alternative would also require a map amendment to the 1994 King County Comprehensive Plan Land Use Map, to redesignate the areas recommended to be downsized from Urban Residential, 4-12 dwelling unit per acre to Urban Residential, 1 dwelling unit per acre.

Community Response to the Planning Options

The Holmes Point Planning Areas response to the planning options suggested to them was vigorous and clear in their preferences. There was a community initiated response which linked Options B and C, which in effect created another category of response.

A tally of the survey results:

The Department of Development and Environmental Services recommends that the existing R-4 and R-6 zoning in the Holmes Point Planning Area be retained, and that site disturbance limits be applied to the King County mapped sensitive areas in the form of two new overlays which would be suitable for use in areas with underlying zoning of R-1, R-4, and R-6.

In the Holmes Point Planning Area these overlays would replace the current Significant Trees Overlay. Use of the recommended overlays in urban residential areas such as Holmes Point would provide an increased level of protection for environmentally sensitive areas, including Denny Creek, steep slopes and the vicinities very active landslide hazard areas (the northern portion of Holmes Point Drive NE was closed for several months in 1997 due to severe mudslides following the heavy snow and rain of December 1996 and January 1997).

Limiting site disturbance would help minimize the impacts of infill development in the area, and encourage retention of tree and other vegetative cover vital to preserving the areas high value as wildlife habitat. At the same time the use of overlays while retaining the R-4 and R-6 zoning would preserve a significant amount of residential growth capacity within the Urban Growth Area (downzoning the area to R-1 was estimated to reduce theoretical potential capacity in the area by 700 or more dwelling units). Therefore, their application to Holmes Point would be consistent with and help implement the following KCCP policies:

• U-503 In the Urban Growth Area, King County should use regulations, incentives, open space acquisition, or , where these measures are not adequate,King County may use low density zoning to protect floodplains, critical aquifer recharge areas, Regionally or Locally Significant Resource Areas, high value wetlands and unstable slopes from degradation, and to encourage linking these environmental features into a network of open space, fish and wildlife habitat and urban separators.

The recommended overlays would have the following features:

This overlay would also replace the "significant tree retention" requirement now in place in the Holmes Point Planning Area (not for the rest of Northshore Community Plan Area however); and provide criteria for flexibility (10 percent increase in impervious surfaces at the Director's discretion) in granting variances from both the overlay and standard requirements to encourage minimal site disturbance.

Same features as the Minimum Site Disturbance Overlay, and would also limit on-site development to one to three lots and provide for transferring density credits on larger, more sensitive sites.

* These zones have no minimum lot sizes: therefore a "typical" lot size was computed by subtracting 25 percent of a 43,560-sq.ft. site for roads and drainage facilities, and then dividing by the indicated base density number; the resulting lot size is given in the cell for each zone. R-8 is shown because its limits would apply in the other zones if a subdivision were clustered to produce lots typical of R-8.

** The recommended overlay limits site disturbance based on lot size, regardless of zone; the "typical" lot size developed for each zone is used as an example, but the example would apply to any lot of a given size regardless of underlying zone.

To request this information in alternate formats for people with disabilities, call 206-296-6600 or TTY Relay: 711.