People with Campylobacter infection usually have diarrhea (often bloody), fever, and abdominal cramps. Nausea and vomiting might also occur. Symptoms usually start within 2 to 5 days after exposure and last about a week. Some infected people do not have any symptoms. Although most persons with Campylobacter infection recover on their own, some need medical treatment. 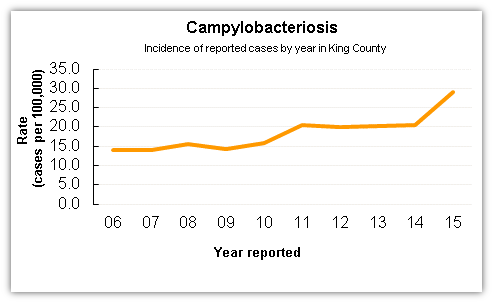 In 2015, 598 cases of campylobacteriosis were reported, which is consistent with an increase in cases observed over the past several years. A likely contributing factor was a new requirement in 2011 for clinical laboratories to report positive tests for Campylobacter. Additionally, the increased use of non-culture based methods to detect Campylobacter has resulted in increased reports; between 10% and 15% of case reports in recent years have been diagnosed by non-culture based methods. Of the 250 cases that were speciated, 231 (92%) were Campylobacter jejuni. Of the 40% of cases for whom information was available, 32 were known to be hospitalized. Sixty-eight cases reported international travel during the exposure period; travel destinations included Asia/South Pacific (23), Europe (20), Mexico (13), South and Central America (7), Middle East (2), Africa (1), Australia/New Zealand (1), and Canada (1).

Outbreaks of campylobacteriosis are rarely identified. In 2013, several employees who attended a picnic with food prepared by a King County caterer developed campylobacteriosis following the event. Although no single food item was implicated, Public Health's Environmental Health Division (EHD) determined that the caterer was not equipped to safely prepare food for large events and required corrective measures, including notification to EHD in advance of events exceeding 250 people. In 2005, an outbreak of campylobacteriosis was associated with a school camping trip. High-risk activities included consuming raw milk products and contact with farm animals. That same year, another outbreak was associated with consumption of undercooked chicken liver pâté at a restaurant, with seven confirmed cases.

Each year in Washington state between 800 and 1600 cases of campylobacteriosis are reported.