Cryptosporidiosis is an intestinal parasitic infection caused by ingestion of Cryptosporidium parvum. The parasite produces cysts (hardy, resistant eggs) which are passed from the body in the stool. The infection is spread through ingestion of cysts in untreated surface water and contaminated swimming pools or other recreational water; contact with infected livestock, wild animals, and pets; and through person-to-person transmission via the fecal-oral route. The cysts are resistant to chlorine, and most swimming pool filters do not remove Cryptosporidia. 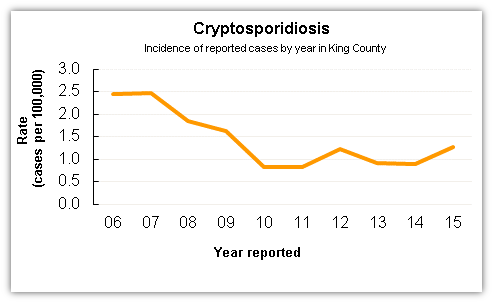 In 2015, 26 confirmed and probable cases of cryptosporidiosis were reported, compared to a five-year average of 18 cases per year. One case was reported to be hospitalized. Of those interviewed, four cases traveled internationally to Europe, Mexico, or Central America during their exposure period.