Infection with the parasite Cyclospora cayetanensis typically occurs when a person drinks or has recreational exposure to contaminated water or eats fruits or vegetables that have been contaminated with feces.

Cyclospora infection does not spread from person to person. The infection is endemic in many developing countries. Domestic infections can result from eating imported, contaminated produce, such as berries or herbs. 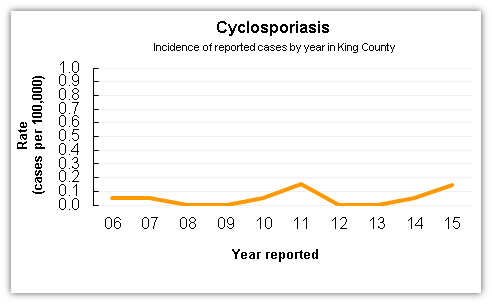 Three cases of cyclosporiasis were reported in 2015. One person likely acquired the infection while traveling to a wedding in another state where multiple attendees became ill; the definitive source of illness was not identified. Another case was acquired in Mexico. The source of infection for the third case is unknown. None of the illnesses required hospitalization. Five cases were reported between 2010 and 2014.