Giardia lamblia is a protozoan widely found in nature. Infection occurs through ingestion of food or water contaminated with the feces of infected mammals especially beavers, puppies, and cats, and sometimes humans. Fecal-oral transmission can occur in child-care centers, households, and during sexual contact. Child-care center outbreaks have been associated with toddler wading pools where diapered children share the same water.

Like other enteric infections, rates of giardiasis increase during warmer months, probably because of more frequent exposure to contaminated water through swimming or camping. Travelers to developing countries are at increased risk of giardiasis as well. 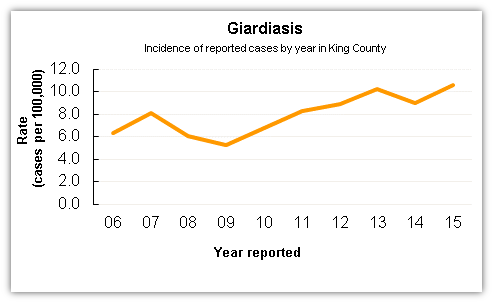 Beginning in early 2011, laboratories were required to report positive results for giardia, resulting in an increase in reports compared to past years. National surveillance guidelines were also updated, eliminating the reporting of giardiasis in asymptomatic persons, many of whom were immigrants and recent international adoptees that had screening tests performed upon arrival to the United States.

In 2015, 218 cases of giardiasis were reported; of these, three people were reported to be hospitalized. Twenty-one (10%) cases reported recent international travel. Among cases who had spent time abroad, cases had traveled to Asia (6), Mexico (4), Africa (5), Central and South America (4), and Canada (2). An additional sixteen cases reported travel elsewhere in the United States during at least part of their exposure period.

Each year in Washington state, between 400 to 600 cases are reported.