Listeriosis is an infection caused by the bacteria Listeria monocytogenes. Persons at increased risk for severe infections include immunocompromised persons, the elderly, pregnant women, and newborn infants. The bacterium is unusual among foodborne pathogens in that it multiplies at low temperatures, including in refrigerated foods. Transmission occurs primarily through ingestion of contaminated drinks and foods, including raw (unpasteurized) or contaminated milk, soft cheeses such as queso fresco, vegetables, and ready-to-eat meats. During pregnancy, infection can lead to spontaneous abortion, stillbirth, or premature birth. Transmission during delivery can cause severe, often fatal, infections in the newborn, even if the mother is asymptomatic. 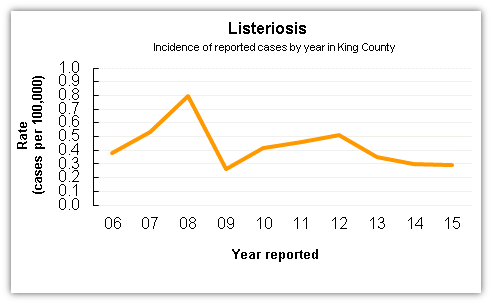 Six cases of listeriosis were reported in 2015, compared to a five-year average of eight cases per year. All six cases required hospitalization. Two cases occurred in a mother-baby pair: the mother became infected during her third trimester, which resulted in premature birth and neonatal demise shortly after birth. Listeria monocytogenes was isolated from the infant’s blood. The woman reported eating several high-risk foods during her pregnancy, including sushi, deli meats, and soft cheeses. Three further cases occurred in immunocompromised individuals, and one case occurred in an otherwise healthy person. Two cases reported international travel during their exposure periods (1 Mexico, 1 Philippines). A 2015 case in an out-of-state resident was connected to a 2014 outbreak where two cases acquired their infections via milkshakes from a local hospital, leading to a product recall. Different ice cream products were in use at the hospital in 2015; the milkshake machines tested positive for listeria, suggesting prolonged environmental contamination.

Each year in Washington state between 11 and 29 cases of listeriosis are reported, including up to five deaths.