Lyme disease is caused by the bacteria Borrelia burgdorferi, which is transmitted by the bite of infected Ixodes ticks. In the United States, Lyme disease is common in the northeastern states, Atlantic coastal states, and the upper Midwest. Infections occur most often in late spring and summer when ticks are most prevalent. Generally, Lyme disease is uncommon in the Pacific Northwest. In Washington state it occurs primarily in the western half of the state. 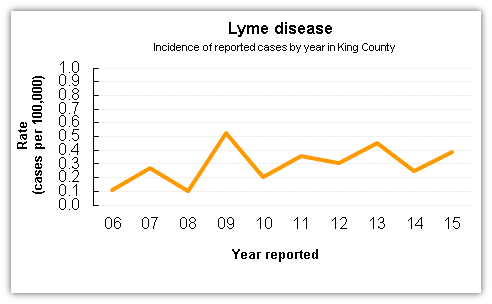 Seven cases of Lyme disease were reported in 2015. All seven cases had exposures in endemic areas in the Midwest (2) and on the East Coast (5) of the United States. An additional 46 reports were determined not to meet the criteria for a Lyme disease case.

Each year in Washington state fewer than 20 cases are reported, and most are exposed outside Washington. In general, zero to three Washington residents per year are infected after likely exposure within Washington state; most of these cases report outdoor exposure in counties west of the Cascade Mountains or in the Cascade foothills, where Ixodes ticks as well as their deer and rodent hosts are located.