Marine biotoxins are poisons that are produced by certains types of algae in seawater. Normally their concentrations in seafood are too low to be harmful, but when changes in environmental conditions cause "algae blooms", the shellfish that feed on algae can build up levels high enough to cause illness.

Different types of marine biotoxins cause different illnesses. Paralytic Shellfish Poisoning (PSP) is a neurologic syndrome caused by consuming shellfish contaminated with marine biotoxins called "saxitoxins." High concentrations of these toxins occur in shellfish during algae blooms known as "red tides," but can also occur in the absence of a recognizable algae bloom. Saxitoxin contamination is monitored in Washington state shellfish harvesting areas and in imported shellfish.

Another marine biotoxin illness is diarrhetic shellfish poisoning (DSP). DSP is caused by consuming mollusks (especially mussels) that are contaminated with okadaic acid or other chemically related toxins through the filter-feeding process. Symptoms of DSP include nausea, vomiting, diarrhea, abdominal pain, fever and chills and occur within 12 hours of eating contaminated shellfish. Symptoms resolve within 3 days and there are no long-term sequelae. 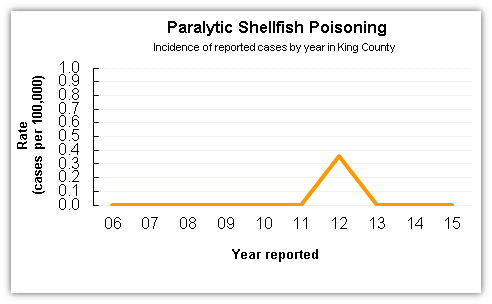 The last cases of shellfish poisoning in King County occurred in 2012, when seven people from the same party were reported with paralytic shellfish poisoning. They had harvested and cooked mussels from a non-King County beach that was closed at the time because of high levels of saxitoxin, the toxin that causes PSP. All of the cases required medical care, and one required mechanical ventilation. All of the cases subsequently recovered.

Diarrhetic Shellfish Poisoning (DSP) was reported in three residents from the same household in 2011. This was the first documented report of DSP in the United States where toxin detection in the implicated shellfish accompanied reports of human illness. In response, the Washington Department of Health expanded its DSP monitoring program to include more shellfish growing areas.

Each year in Washington state between zero and seven cases of PSP are reported.