Meningococcal disease is an uncommon but serious and potentially life-threatening infection that usually involves the blood stream (bacteremia) and/or central nervous system (meningitis). Meningococcal infections are caused by certain serogroups (primarily B, C and Y in the United States) of the bacterium Neisseria meningitidis.

The bacteria are spread primarily by respiratory droplets (droplet spread) produced when an infected person coughs or sneezes and by direct contact with the saliva of an infected person (or carrier). Rates of disease are highest in young infants, adolescents and young adults. A vaccine is available to protect against infections with type A, C, W-135, and Y meningococcal disease and is recommended for all adolescents. 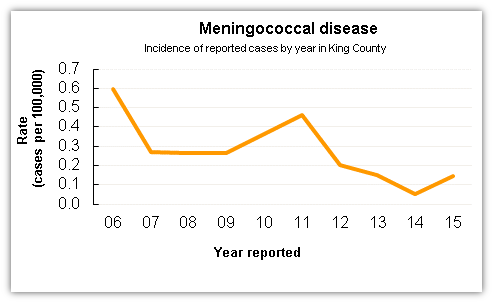 Three confirmed cases of meningococcal disease were reported in 2015. All three cases were isolated incidents where no source of infection could be determined; two were attributable to serogroup W135 and one to serogroup Y. All three cases were hospitalized with bacteremia, and one died. Two cases occurred among otherwise healthy young adults. Although other U.S. regions have reported cases in persons living in university dormitories and among men who have sex with men, King County has not received similar reports.

Each year in Washington state between 20 and 40 meningococcal disease cases are reported. 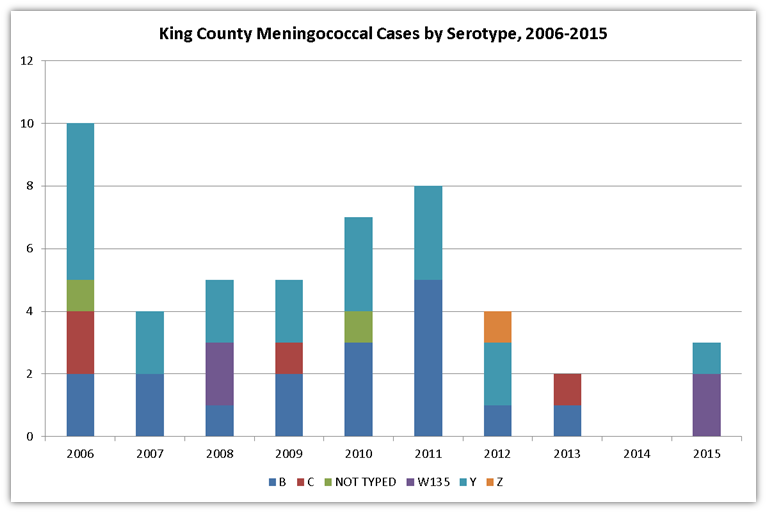