Mumps is an acute illness caused by the mumps virus that is spread primarily by respiratory droplets (droplet spread) produced when an infected person coughs or sneezes. Mumps is most easily spread 48 hours before the symptoms begin. Most adults born before 1957 have been infected naturally and are probably immune. Immunization is the best way to prevent mumps. Mumps protection is provided in the combination MMR vaccine together with measles and rubella. 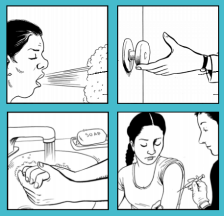 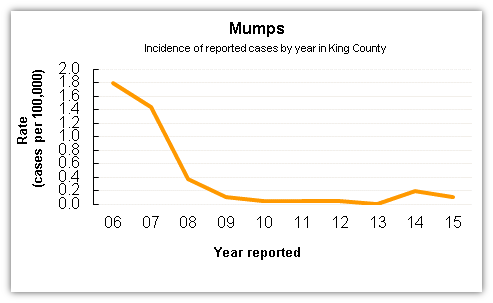 Two probable and two suspect cases of mumps were reported in 2015; probable cases were those with mumps-like illness who had laboratory testing suggestive of mumps, while suspect cases had illness but no diagnostic testing. Three of the four cases did not know their immunization status for mumps or had received only one dose of mumps-containing vaccine. The source was not identified for these cases, though none reported recent international travel or contact with others with mumps-like illness. None of the cases had to be hospitalized.

An unusually high number of mumps cases (53) were reported in Washington state in 2007, reflecting in part a change in reporting criteria, as well as increased testing following a large outbreak in the Midwest in 2006. Since then, Washington state has received between zero and 14 confirmed and probable mumps cases each year.