Salmonellosis is a diarrheal illness caused by infection with Salmonella bacteria that are spread through the fecal-oral route, through contaminated food and water, and through direct and indirect contact with infected animals and their environments. Animals commonly infected with Salmonella include reptiles (such as snakes, lizards, and turtles), chickens, ducks, pigs, cows, and rodents. Pets are a common source of infection. Infected children and persons with poor hygiene can contaminate the household environment, leading to household transmission.

Persons with salmonellosis can remain infectious even after symptoms resolve and spread infection for several days to weeks and less commonly, for months or years. Salmonella outbreaks have been associated with a variety of commercially distributed food products, including produce, nuts, eggs, and poultry. 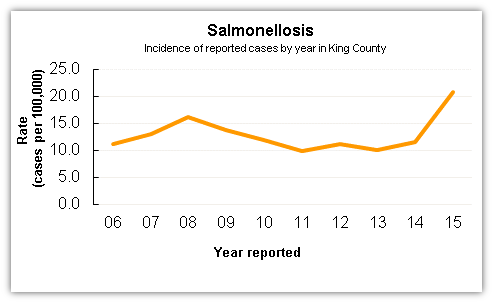 In 2015, 351 laboratory-confirmed, 74 epidemiologically-linked, and three suspect cases of salmonellosis were reported. This is the highest number of cases ever reported to King County (five-year average, 214 cases). Seventy-one (17%) of all Salmonella cases reported during 2015 were hospitalized and none died.

One hundred-seven lab-confirmed and 37 epidemiologically linked cases (no laboratory testing available) in King County in 2015 were associated with a multi-state outbreak ultimately linked to a local pork processor. A total of 192 cases matched by pulsed field electrophoresis (PFGE) were reported in five states. Two main categories of exposures were identified: (a) custom-slaughter pork, often purchased whole and roasted at a private location, and (b) food consumed from local restaurants, including pork and non-pork items that were likely cross-contaminated. Environmental samples from food (leftover pork, raw beef), food-handling equipment at local food establishments, and swabs collected at the implicated pork processing facility tested positive for identical Salmonella bacteria. King County Food Protection Program conducted extensive follow-up with King County food establishments who had handled the implicated product, and conducted numerous trainings and site visits to improve food handling practices at key facilities. An extensive environmental investigation was also conducted at the pork processing facility in Pierce County, WA, and resulted in a USDA Class I recall of 523,380 pounds of pork and pork products.

In another incident, 12 confirmed and six probable cases were linked to eating on a single date at a Seattle restaurant. Epidemiologic and environmental investigations concluded the most likely source of infection was hollandaise sauce served with a selection of brunch dishes. Hollandaise sauce, which includes undercooked eggs, is considered a high-risk food, and should be avoided by young children, elderly persons, and persons with weakened immune systems. Investigators confirmed that an appropriate warning had been printed on the menu.

Five cases were associated with a multi-state outbreak linked to cucumbers imported from Mexico, in which 907 cases were reported in 40 states.

Each year in Washington state between 650 and 850 cases are reported, of which roughly 200 to 300 are in King County. Since 2004, "genetic fingerprinting" of Salmonella isolates has facilitated the identification of cases linked to nationwide outbreak.