Tetanus results from the action of a neurotoxin produced in infected tissues by the bacterium Clostridium tetani, resulting in severe, potentially life-threatening muscle spasms. In the United States, tetanus is predominately associated with infected injuries, including acute wounds contaminated with dirt, saliva, or feces, puncture wounds, crush injuries, and unsterile injections. In the United States, tetanus typically occurs in adults over 60 years of age, reflecting a lack of immunity in this population. 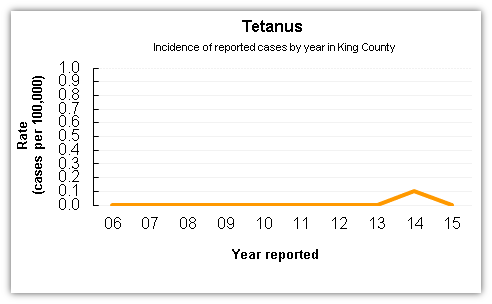 The last reported cases of tetanus occurred in 2014, one in an adult and one in a child. The adult had a history of tetanus immunization within the past 10 years; the child was unimmunized. Both cases required hospitalization. Prior to that, the last case of tetanus reported in King County was in 2005 in an adult over 60 years of age.

There have been nine tetanus cases reported in Washington state in the past 20 years.