Vibrio species are bacteria that occur naturally in marine waters. Eating undercooked or raw shellfish, especially raw oysters, is the main risk for acquiring vibriosis from infection with Vibrio parahaemolyticus. Growth of Vibrio species in seawater is amplified during the warm months and Vibrio levels in shellfish increase during the summer.

Unlike infections with V. parahaemolyticus, which cause symptoms like watery diarrhea, abdominal cramping, nausea, and vomiting, V. alginolyticus infections typically present as skin or inner ear infections. Whereas raw oysters and shellfish tend to be the predominant exposure for V. parahaemolyticus cases, V. alginolyticus cases are more often associated with recreational water exposure such as swimming or scuba diving; cases of V. alginolyticus often have a pre-existing open wound (such as an ear infection or cut on the foot) that becomes infected when exposed to water containing the bacteria. 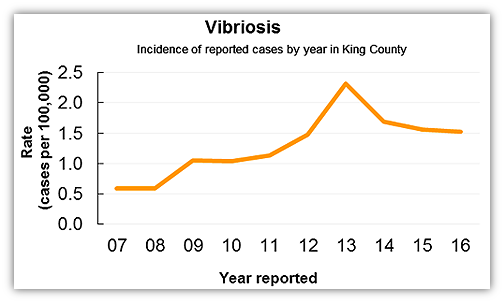