Our command staff bring a wealth of knowledge and a tremendous amount of combined experience to their assignments.

Born and raised in King County, Mitzi G. Johanknecht has served her community for 35 years and is an experienced, progressive law enforcement leader.  She began her law enforcement career when she joined the King County Sheriff’s Office on January 8th, 1985.  Through her history of dedication and hard work, along with a strong sense of honor and respect, she worked her way up through the ranks and was elected to the position of Sheriff on November 7, 2017.

Sheriff Johanknecht has a wide-range of experience, having served in leadership roles in every division and location in the Sheriff’s Office.  Mitzi was the first woman to command TAC-30, the King County Sheriff’s Office SWAT team. As a deputy, she was the first to work with a multi-disciplinary team in King County housing.  Throughout her career, Sheriff Johanknecht has collaborated with other agencies, community groups and residents to build relationships of trust to promote public safety.

Mitzi and her wife, Maureen, live in West Seattle. Their adult daughter, Sydni, and son in law Scott live in New York City. Sheriff Johanknecht serves as an executive board member for the Washington Association of Sheriffs and Police Chiefs (WASPC). She also volunteers on the board of Companis, a local non-profit that matches volunteer professionals with non-profit agencies in need of staffing assistance. 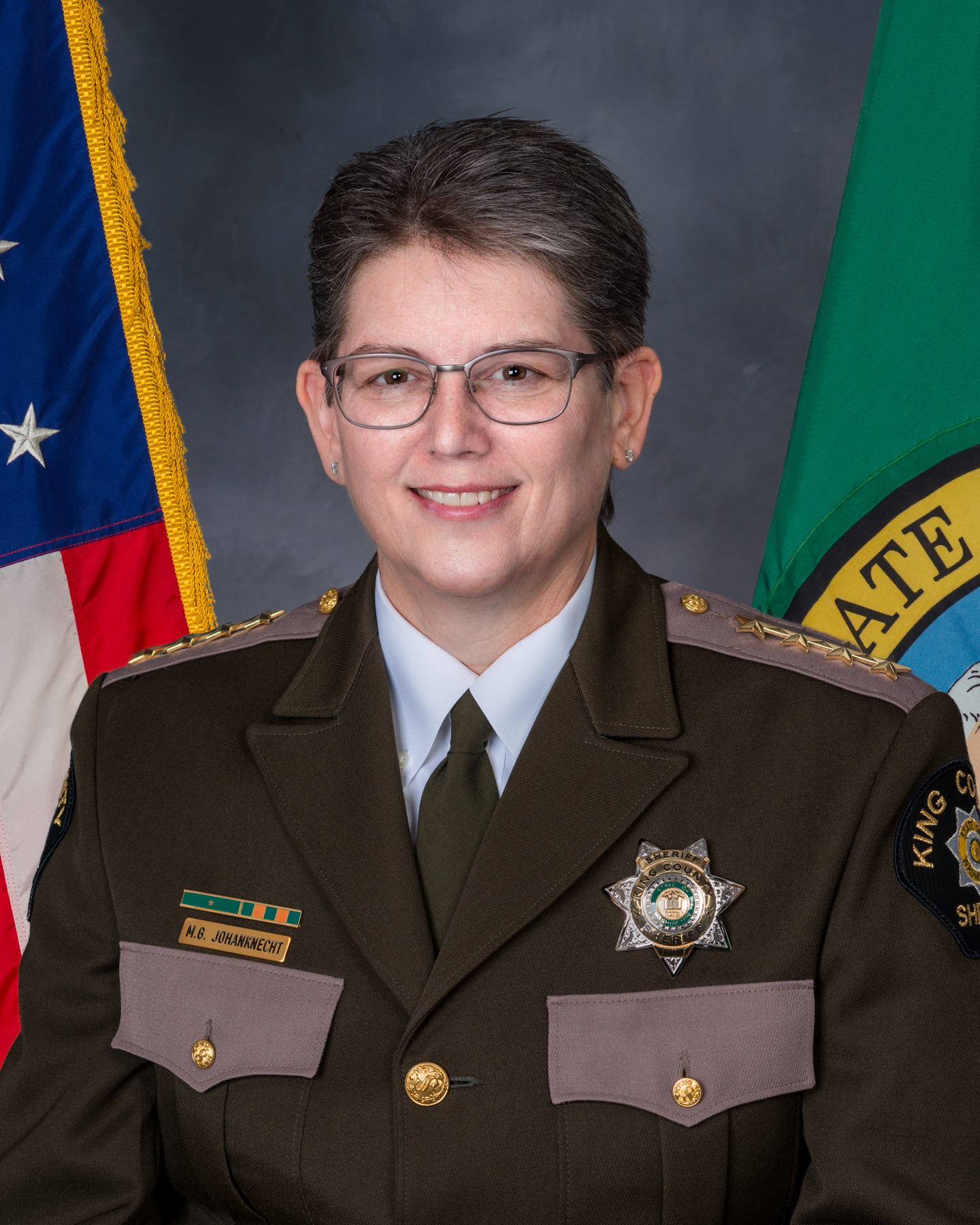 Patti's previous experiences include serving as an internal affairs investigator for the County’s Department of Adult and Juvenile Detention, and an assistant director of that department’s Community Corrections Division.  At the state Employment Security Department, she was responsible for the regional investigative program that detected fraud and theft of unemployment benefits.  She was also a special agent for the Washington State Gambling Commission, and completed the Basic Law Enforcement Academy.

More recently, she served as a key advisor to the King County Executive and County Council on strategic planning, labor policy development and employment law as the Director of Labor Relations. She concurrently served as the interim director of the Office of Law Enforcement Oversight (OLEO), working with staff, the Sheriff's Office, and the public to improve services and promote awareness of the role of civilian oversight in King County.

Patti enjoys traveling and spending time with friends and her two sons. 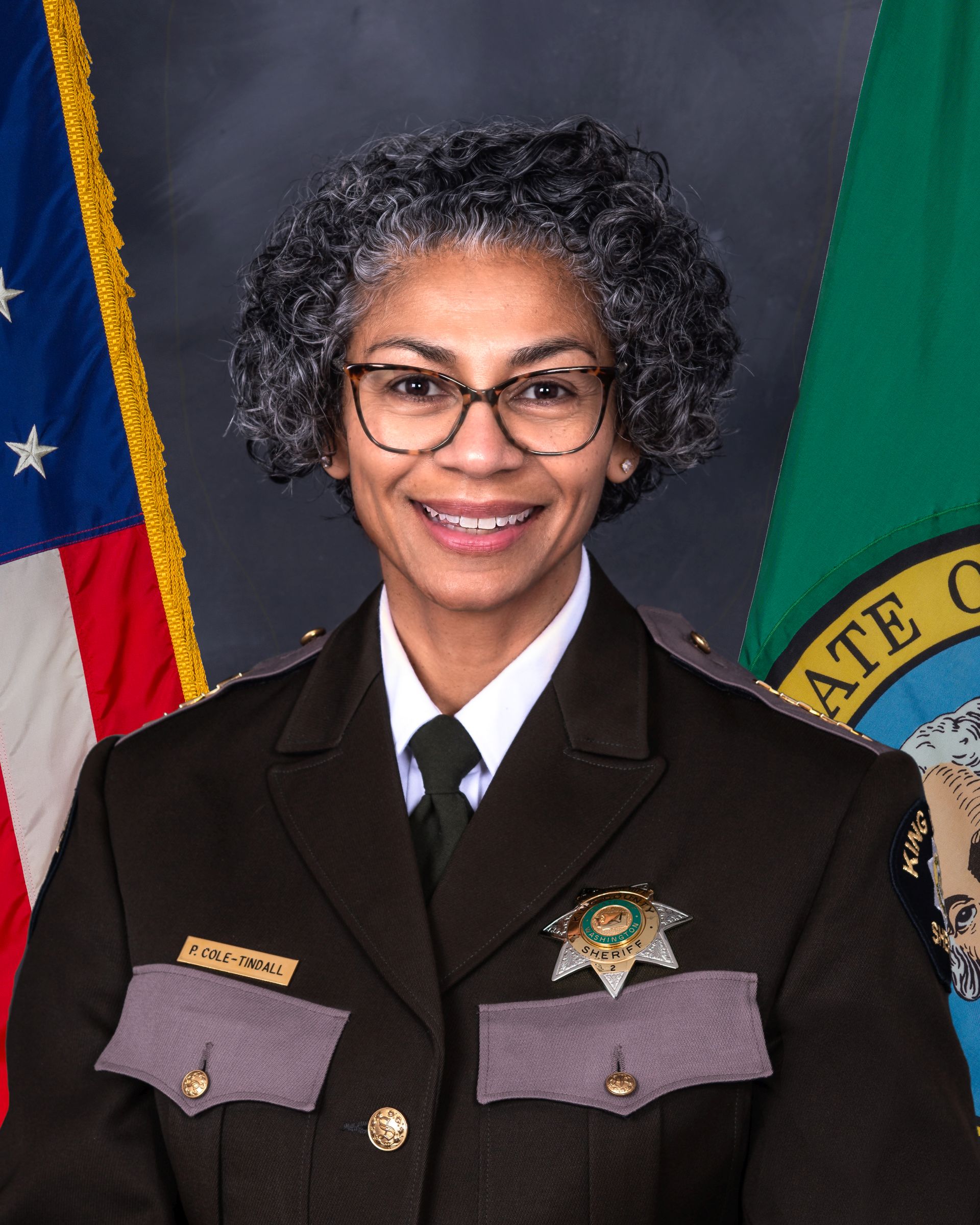 Chief Jesse Anderson has twenty nine years of policing experience with the King County Sheriff’s Office. Jesse began his career at the Southwest Precinct in Burien. He has held a number of operational, investigative and administrative assignments as deputy, detective, sergeant and captain throughout his career. Prior to being promoted to the position of Chief of the Patrol Operations Division, Jesse was the Major of the Southwest Precinct. He has dedicated his career to providing high quality and professional law enforcement services to the residents of unincorporated King County and the contract cities in which he has served. He has long term, well established working relationships within KCSO and with Sheriff’s Office contract partners. During his tenure as the head of the Contracting Unit, Jesse worked with contract partners to problem solve and meet their contract needs. His firsthand experience with contracting includes assignments in the City of Burien Community Policing Unit , Burien Street Crimes Unit, serving as a City of Sammamish patrol sergeant & Acting Chief of Police, and as a captain for the Metro Transit Police.

Jesse enjoys engaging with all members of our King County communities and has an established reputation as a trusted leader with the highest standards of integrity. He is known for leading by example, walk around management and incorporating the principles of transformational leadership. Jesse is also an advocate for continuous organizational improvement.

He has served in a wide array of assignments and has continuously built on his career experience within KCSO. Jesse has served as part of incident command and supervisory oversight for major events. He has managed the Internal Investigations Unit and participated in executive level decisions and policy direction. He has command knowledge and experience with Precinct Operations and Administration. Prior to his promotion to Captain he was a part of the Major Crimes Unit where he was responsible for the supervision of homicides, suspicious deaths, felony assaults, robberies, officer involved shootings, animal abuse, kidnapping, missing persons and juvenile runaway investigations.

Jesse is committed to fair, consistent, and equitable treatment as a leader in the Sheriff’s Office. He is proud to set an example of honesty and integrity for those he follows and those who will follow him. He consistently demonstrates a strong work ethic, positive attitude, sound judgment, strong decision making skills and an open-mind to the ideas of others.

In addition to having a bachelor’s degree and many supervisory & management training classes, Jesse’s law enforcement education includes graduating from the FBI National Academy and the Northwestern University Center for Public Safety, School of Police Staff & Command. 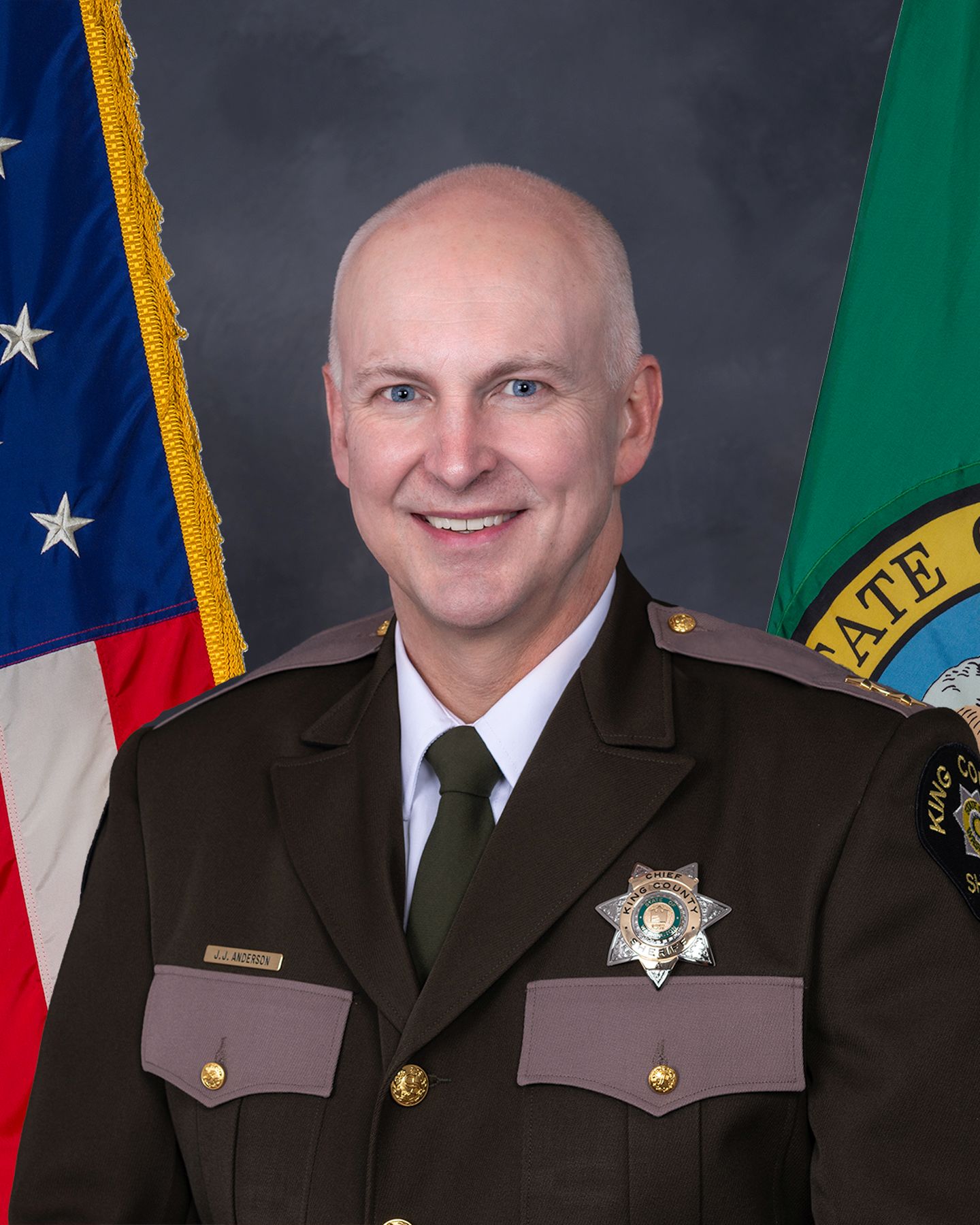 Chief Olmsted has served King County for 22 years and has 31 years of law enforcement experience. Troy initially grew up and attended school in the Lake City area of Seattle before moving out to the suburbs of Shoreline and Mountlake Terrace. After honorably serving five years in the United States Air Force with assignments in Europe and stateside, Troy became a deputy for the Maricopa County Sheriff’s Office. In addition to patrol, Troy was a member of the Honor Guard, a Field Training Officer, DARE Instructor and Community Relations Officer. After nine years of service to the citizens of Arizona, the call to return to the roots of the northwest could not be ignored.

In 1997 Troy began working in the North Precinct. Having a passion for training, Troy was selected as a Master Police Officer in 2001. Troy trained and monitored new deputies until he promoted to sergeant in 2006. As a sergeant Troy worked patrol assignments in the Southeast Precinct, Metro Transit Police and SeaTac. He supervised a Criminal Investigations Unit and was a Detective Sergeant in the Internal investigations Unit. As a captain he managed Field Operations and Criminal Investigations Units. His assignments included Shoreline and Southeast King County.

As a Major, Troy was Commander of the Southeast Precinct, Sheriff’s Office K-9 Unit and the Administrative Review Team (ART). This team is responsible for reviewing serious use of force and critical incidents. With a background in use of force reviews, Chief Olmsted has been heavily involved with updating and implementing national best practice use of force and de-escalation policies for the Sheriff’s Office.

Troy and his wife Kim live in unincorporated King County. They have been married for 31 years. Together they have raised four children. Their oldest son Ryan is also deputy with the King County Sheriff’s Office. They enjoy family gatherings and traveling. 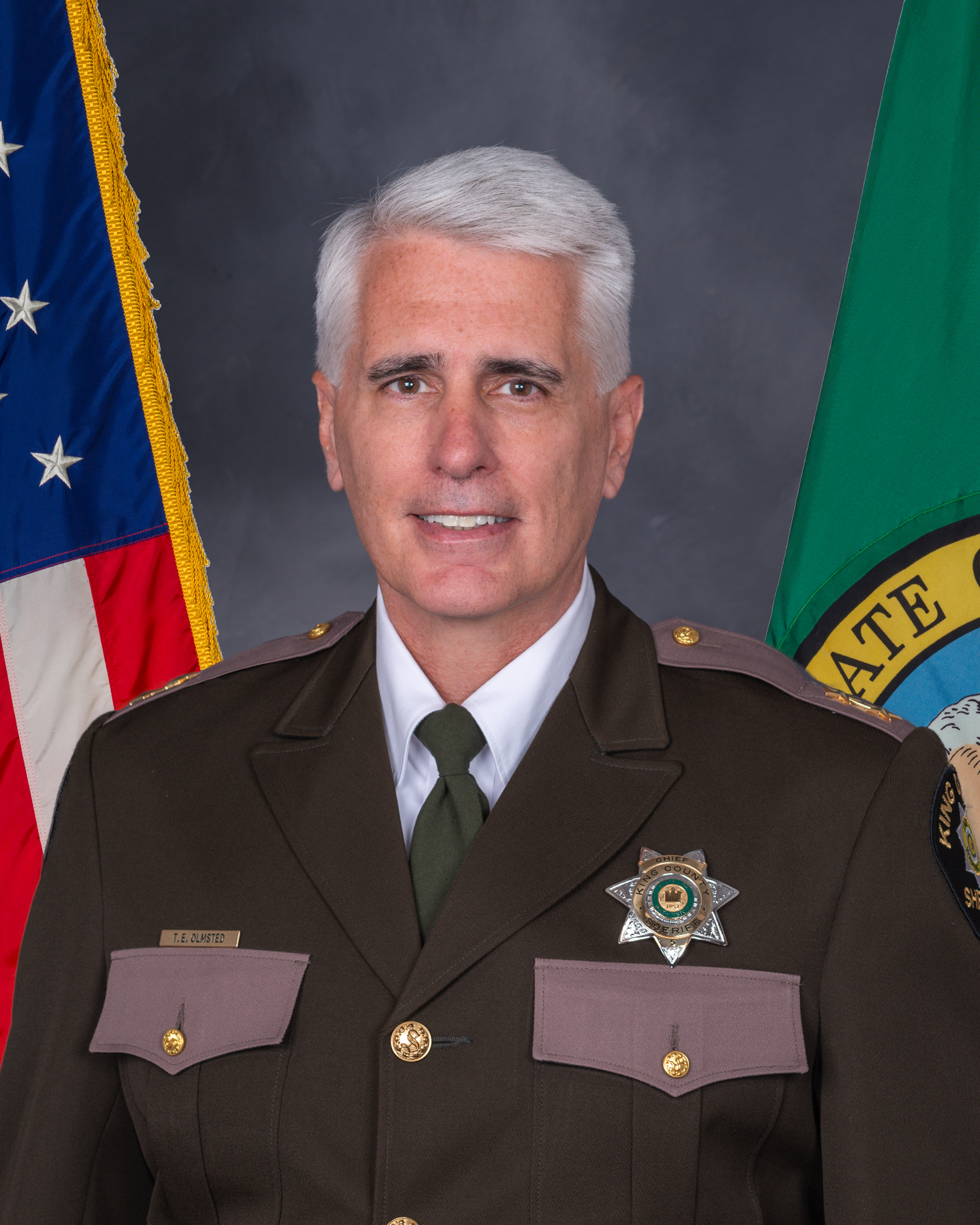 Chief Jeffrey (Jeff) Flohr has over 27 years of law enforcement experience. Jeff began his career in the Bay Area of California, where he worked for Moraga and San Pablo Police Departments. During his time in California, Jeff served as Field Training Officer, K9 Handler, Drug Recognition Expert, Gang Detective, and member of several state and federal task forces.

Drawn to the size and diversity of the King County Sheriff’s Office and the variety of assignments and opportunities it provides, Jeff began his career with KCSO in early 2005. He started as a Deputy in the contract city of Kenmore, served as a School Resource Officer in Kirkland, and quickly became a Master Police Officer (MPO) before being promoted to Sergeant in 2012. During his tenure as Sergeant, Jeff had numerous assignments, including North Precinct patrol, KCSO patrol K9 Unit, Sound Transit, Special Emphasis Team, and Explosive Detection K9 Unit. In 2016, Jeff was selected to be the Field Operations Administrative Sergeant for the Patrol Operations Chief. In this role, Jeff supported KCSO patrol operations and assignments county-wide, including Background Investigations, staffing, and recruiting. Jeff also coordinated the Critical Incident Review Boards for KCSO.

Jeff believes in community policing that is fair and accountable. Throughout his career, Jeff has led by example and built strong working relationships at all levels of government through open and honest communication. Jeff has served as Incident Commander for high-profile events including dignitary visits, anti-terrorism efforts, concerts, sporting events, and civil disturbances. He has also led the development and implementation of several initiatives, including the creation of Sound Transit’s Special Emphasis Team (SET) to enhance rider and employee safety; modernizing the statistical tracking of K9 deployments, contacts, and training documentation; working with the King County Council to implement ordinances impacting solicitations and noise complaints; and working with U.S. Senators and Congress members to update King County’s 911 system to address next-generation issues. Jeff has received numerous accolades and awards throughout his career, including Officer of the Year, Deputy of the Year, Sergeant of the Year, Lifesaver Award, and the Sheriff’s Medal.

Jeff attended Saint Mary’s College of California on a football scholarship. He has also attended numerous specialty law-enforcement and leadership development courses. Most recently, he completed the FBI-LEEDA Executive Leadership Institute. Jeff and his wife, Stevee, have been together for 20 years. They enjoy traveling, watching their daughter play softball, and playing with their 2 dogs. 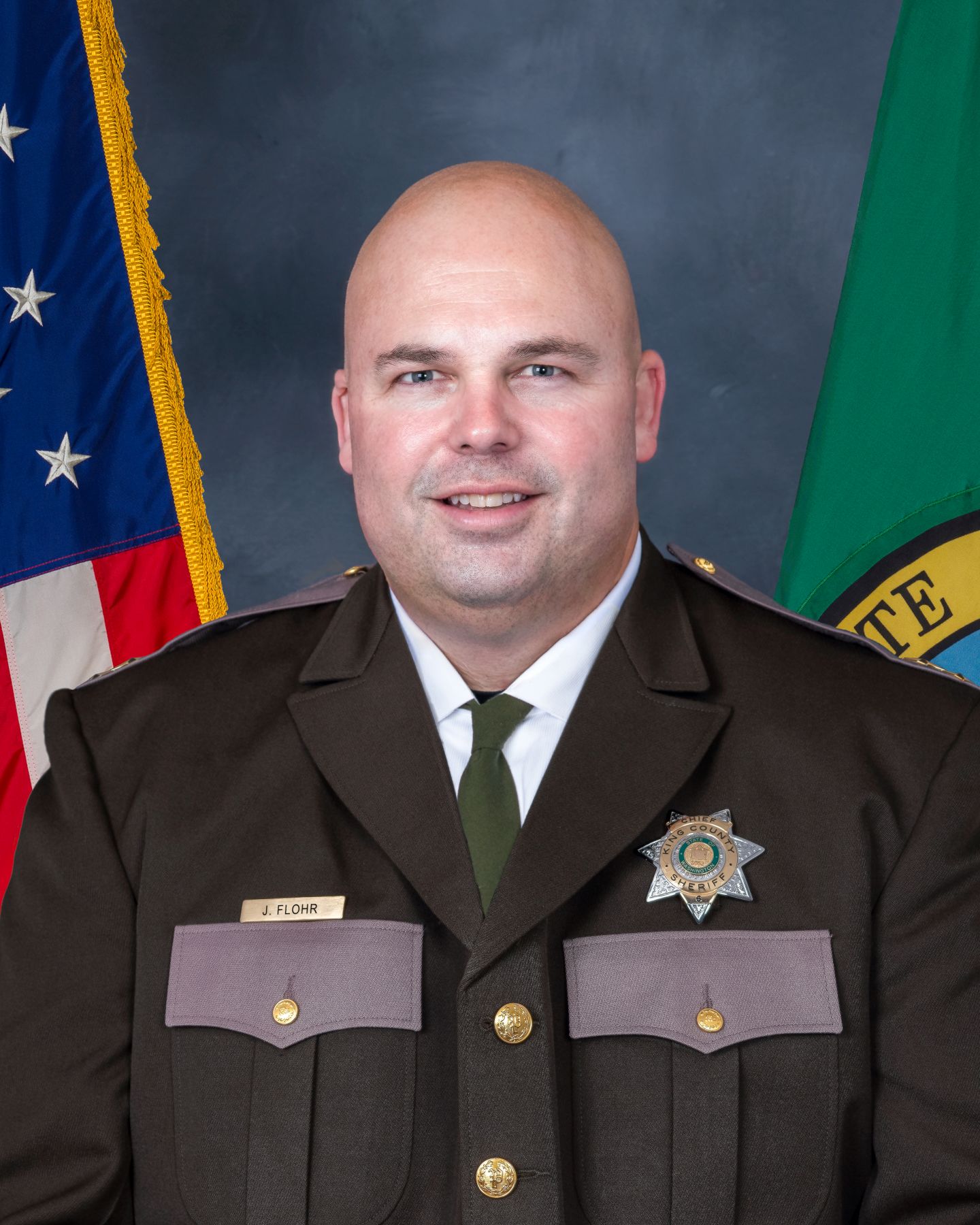