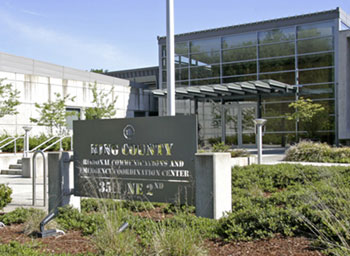 In 2003, the KCSO’s Communications Section moved into the Regional Communications and Emergency Coordination Center (RCECC). This state-of-the art facility is able to withstand earthquakes and other natural disasters, ensuring that our systems are safe and operational in emergencies.

A secondary operations area includes eight call receiving workstations, five dispatch workstations, and one supervisor workstation that is capable of both call receiving and dispatching. The secondary operations area is designed as a hands-on training facility for new call takers and dispatchers. In the event of a major emergency, it also provides additional backup workstations. It also serves as the backup location for Valley Communications Center, another major 9-1-1 center in south King County, in the event their systems or facility aren’t operational. 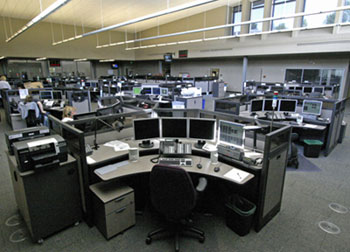 The kitchen and courtyard areas are shared spaces meant for the use by all employees who work in the building and for people at the center during an emergency activation. The kitchen is equipped with three refrigerators, stove and microwave ovens, vending machines, ice maker, phones and television. The courtyard is a secured area and provides space where those involved in an activation can get away for a quiet moment outdoors.

Security cameras are located in various areas of the building and outside. Employee parking is fenced, lighted, and accessible by proximity card. Visitor and ECC activation parking includes 72 spaces and is lighted.