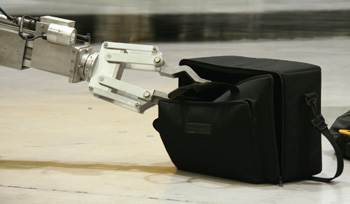 Citizens turn in thousands of pounds of fireworks and old ammunition each year. Schools, businesses, and other entities receive suspicious packages or bomb threats. Although significantly reduced, clandestine drug labs are still in operation and need to be mitigated. There are growing threats of foreign and domestic terrorism. Special Operations Hazardous Devices and Materials Team (HDMT) responds to all of these situations.

The unit responds to over 200 calls every year, and handles thousands of pounds of explosives and other hazardous materials. If a case involves explosive materials, the detectives will safely collect and store the evidence, and review the case for violations of state or federal laws. When dignitaries visit the Metropolitan King County area, our technicians are on hand to evaluate and respond to any suspected hazardous situation.

The FBI trains the King County Sheriff’s Office bomb technicians. Each technician is recertified every three years at the Redstone Army Arsenal Hazardous Devices School in Huntsville, Alabama. At the training, they learn how to handle, use and safely dispose of commercial explosives, pyrotechnic mixtures, improvised explosive devices and various chemicals. Technicians also are trained and certified to handle hazardous materials and understand the complexities nuclear, biological and chemical attacks. The FBI's Bomb Data Center helps in providing training, technical support, and research and development to public safety agencies in the field of bombing investigations.

The Hazardous Devices and Materials Team uses sophisticated state of the art equipment. A Remotec Andros robot was purchased in 2003. Other equipment includes a fully electronic computerized portable X-Ray system, radiation and environmental monitoring equipment. We will receive a second robot in 2010. It is smaller and gives us the ability to work in confined spaces.

Unit personnel instruct King County Sheriff's Office Deputies in the proper response to explosive or hazardous calls. They also have programs to instruct other agencies about how to recognize and react to a hazardous situation. The unit also gives instruction on handling bomb threats and searching for suspect devices. The technicians provide the King County Sheriff’s Office Tac-30 (SWAT) team with expertise in breaching barricaded structures and in the recognition of booby traps.

The King County Sheriff's Office and the Bureau of Alcohol, Tobacco, and Firearms and Explosives have joined in a partnership to provide explosive detection canines to the Northwest.

Browning, a chocolate Labrador assigned to Deputy Troy Chaffee, is the only certified Explosive Courier Detection dog in the region. This means that he has been trained to detect explosives specifically on people and in buildings, vehicles, open areas, watercraft, aircraft, mass transit vehicles, and in baggage. Stevie, a black Labrador retriever assigned to Deputy Tim Morgan, is one of only 69 ATF explosives dogs in the United States.

Both Browning and Stevie are trained to find and discriminate more than 20,000 possible chemical combinations that could be part of explosive compounds. They can be used to find explosives, firearms, ammunition, or spent casings and has been found invaluable in searching area schools for possible firearms.