The Air Support Unit operates six days per week. We operate one Bell 206B3 helicopter, one UH-1H “Huey” helicopter that we received from the Federal 1208 (surplus) program and one Bell 407 received from regional UASI funds. Our total annual flight time averages about 1200 hours a year. 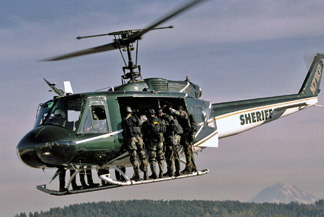 In addition, we are used under contract by the Coast Guard and WA State Department of Ecology to support responses to oil spills. 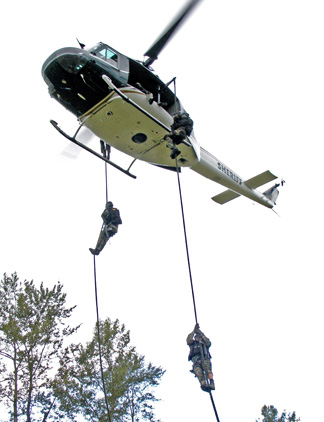 Force Multiplier
A law enforcement helicopter is often referred to as a “force multiplier.” It has become an indispensable part of the Sheriff’s Office. Nationwide studies have shown that helicopter/car teams have higher felony arrest rates than that of car teams alone. The helicopter’s aerial advantage gives it many more times the surveillance capability of a ground unit. This vantage point, plus the speed in which a helicopter can get a trained observer over a crime scene, provides containment that often essentially assures an arrest. It does so efficiently, without having to pull other patrol units from their areas of responsibility. 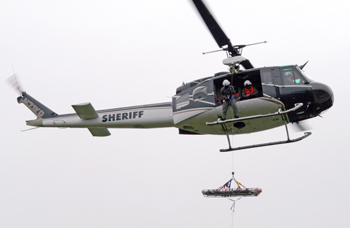 Patrol
A helicopter’s vantage point permits observation of activities not seen by ground officers, such as on rooftops and in fenced yards. At normal patrol speeds and altitudes, a helicopter can keep an object in view on the ground ten times longer than a ground officer moving at normal street patrol speeds. Our helicopters are equipped with tracking equipment capable of locating bank robbers and stolen vehicles. We have color and forward looking infrared (FLIR) cameras and 30 million-candle power spotlights that enable us to find suspects at night.

Interagency Support
In addition to its many law enforcement applications, the helicopter may be required to assist other agencies in diversified missions. We have assisted the Secret Service, FBI, DEA, Customs and local law enforcement with a wide variety of surveillances and other missions. In many jurisdictions, law enforcement helicopters are often used to transport local and government officials and visiting dignitaries, providing a significant and economical improvement in security.

Search and Rescue
The helicopter’s excellent visibility and the ability to hover make it a very effective Search & Rescue (SAR) vehicle. We have assisted the SAR community throughout Washington and Oregon. Unhampered by terrain, a helicopter can quickly bypass ground obstacles, saving valuable time. It can search large areas quickly, allowing ground searchers to concentrate their efforts in other search areas. Using the hoist we can insert rescuers and evacuate victims. The time saved can easily mean the difference between life and death.