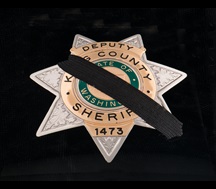 The King County Sheriff’s Office honors the deputies who have fallen in the line of duty.

Deputy Steve Cox
December 2, 2006
On Saturday, December 2, 2006, King County Sheriff's Deputy Steve Cox was shot while interviewing a witness to a crime. He was transported to Harborview Hospital where he died a few hours later. Deputy Cox symbolized the concepts of community policing and giving back to the community.

Deputy Richard S. Cochran II
May 22, 1991
Officer Cochran was killed in an on duty motorcycle accident. He was struck from behind by a transit bus and then pushed into a van during a morning rush hour pileup.

Detective Michael Raburn
March 27, 1984
Detective Raburn, a Civil Unit Detective, arrived at a residence in Seattle to serve a court ordered Eviction Notice. When he knocked on the front door, the resident opened the door armed with a sword and stabbed Detective Raburn in the chest. Detective Raburn was able to fire several shots while retreating but died from his wounds.

Sergeant Samuel A. Hicks
June 24, 1982
Sergeant Hicks and another investigator were verifying the accuracy of a tip given to them in a murder investigation. While at the scene, they encountered the suspect, who opened fire on their patrol car with a high powered rifle. As the officers returned fire and attempted to locate cover, Sergeant Hicks was struck in the chest and killed.

Deputy Donald A. Armeni
September 15, 1954
Deputy Armeni was shot and killed by a suspect who he was taking into custody on a warrant.

Deputy Norman F. Silkworth
March 07, 1952
Deputies Silkworth and others responded to a robbery in progress in which armed suspects had tied up the employees at the Inglewood Golf and Country Club and robbed the safe. After the suspects fled, the employees freed themselves. When the deputies entered the building, one employee mistook them for the robbers and opened fire. Deputy Silkworth was shot three times and died at the scene.

Deputy Thomas Meehan
November 13, 1935
Deputy Meehan was found outside his patrol vehicle on the Old Valley Road one half mile north of the city of Kent, shot in the head by unknown suspects.

Special Deputy Steve Watson
July 09, 1934
While working as a special deputy during labor unrest along the Seattle waterfront, Deputy Watson was pulled from his vehicle, beaten and shot by a group of activists.

Deputy Raymond C. Scott
April 04, 1920
Deputy Scott and several other deputies arrived at the scene of a robbery in progress. The two suspects, who were robbing a motorist at gunpoint, entered a shootout with the deputies, killing Deputy Scott at the scene.

Deputy John Williams
March 18, 1903
As a part of a larger posse, Deputy Williams and Everett Detective Charles Raymond were hunting Harry Tracy, an armed escapee from the Oregon State Prison. On July 2, 1902, both were shot while attempting to arrest Tracy. Detective Raymond was shot and killed instantly at the scene of the shooting. Deputy Williams died nine months later from the wounds he received in the shootout.

Posseman Cornelius Rowley
July 3, 1902
Posseman Rowley was one of six officers shot and killed by an escaped convict.  After an escape and murder of the three correctional officers and three civilians, a manhunt began for the suspect.  On July 3, 1902, the suspect set up an ambush near Bothell, Washington.

Sheriff Louis V. Wyckoff
January 21, 1882
On January 19, 1882, a vigilante group called the “Committee of Safety,” reluctantly turned over two suspects in a fatal robbery attempt. The next morning, two to three hundred men of the group overpowered the sheriff and his deputies, and hanged the two suspects and another man. Sheriff Wyckoff died the next morning of a heart attack.

Officer Down Memorial Page
The ODMP is dedicated to honoring the lives and sacrifices of fallen heroes.