Why did the company invest in its bicycling program: Bicycling has become part of the office culture at Mithun and is recognized as an important element of climate stabilization. It has found a way into projects and design activities, and is supported and participated in at all levels in the firm.

Strategies used: To encourage employees to go green, Mithun provides resources to staff to reduce their carbon footprint, including mass transit subsidies, vouchers for regular bike commuters, and a fleet of bicycles available for employees who have mid-day meetings or errands to run near their downtown Seattle office, or who need a bike for the commute home.

On-site bike storage and locker rooms with showers and space for extra gear make alternative commutes on foot or by bicycle convenient and comfortable, especially for our employees who live farther from the center of the city (one of our principals makes the occasional 56 mile round trip from Mukilteo by bicycle). A series of bike safety and maintenance classes, and bike tune-ups on site, provided through the Cascade Bicycle Club, have helped educate us on how to consider bicycles as a viable commute option. The enthusiasm of Mithun employees for bicycling has motivated others, inside and outside the firm, to try it out.

Results/outcomes: This year, forty percent of our staff biked or walked to work during the Cascade Bicycle Club’s Bike to Work Month in May. Participation expanded across the firm, from the President and CEO and teams of principals, to Mithun’s professional and support staff. Mithun also shared its storage facilities with another firm in the neighborhood to encourage its staff to ride. Because of the company’s support of the Bike to Work Month program, we were honored by Cascade with the 2008 Doug Walker Lifetime Achievement Award, the first time the award was given to a firm, rather than an individual.

A small portion (less than half!) of Mithun's bicycle commuters 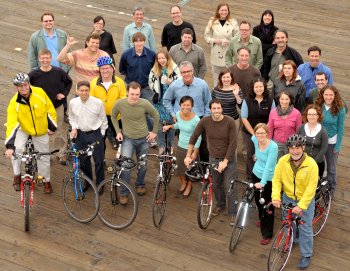