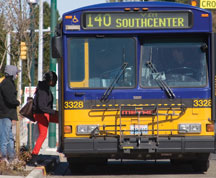 The Metropolitan King County Council directed the County Executive to form the task force when it adopted the 2010 county budget. The council later issued guidelines for the task force.

The task force was formed as Metro faced competing pressures: on one hand, strong demand for transit services countywide; on the other, rising costs and a steep decline in sales-tax revenues—Metro’s primary source of operating funds.

In this context, the task force was asked to identify short-term and long-term objectives for transit service investment, and to formulate a service implementation policy based on those objectives.

Members
The task force was made up of a broad range of municipal and community stakeholders appointed by King County Executive Dow Constantine, plus three nonvoting members. A consultant facilitated the task force. Read member bios

The award recognizes the task force for its work to clarify transit service priorities during a time of budget reductions.

The task force transmitted its report and recommendations to the King County Council and County Executive on Nov. 8, 2010. The task force participated in three public forums at which members discussed their recommendations. The report, presentations and other materials are available below.

Progress reports
Since the Regional Transit Task Force issued its report and recommendations, Metro and King County have followed the task force's guidance, taking a number of major steps forward.