Mission: To serve as an interjurisdictional forum for information-sharing, advocacy, and coordination to resolve transportation issues, and to establish priorities for implementing integrated multi-modal transportation projects and programs consistent with the goals of the Growth Management Act.

The SeaShore Transportation Forum was initially formed in response to the King County Metro Transit Long Range Policy Framework, adopted in 1993, that divided Metro service into three geographic subareas for the purpose of allocating new transit service subsidy. The “Seattle-North King County” subarea created for this purpose included only the cities of Seattle, Shoreline, and Lake Forest Park, and King County. Sound Transit created a similar subarea and adopted a subarea equity policy as part of Sound Move.

In about 1995, the SeaShore Transportation Forum began regular meetings, with participation by the City of Seattle, King County, Lake Forest Park, Shoreline, Snohomish County, Bothell and the Kenmore Governance Committee, which later became the City of Kenmore. The primary focus was to develop recommendations for the subarea for the first Six Year Plan for Metro. Recommendations were developed by consensus, and the Forum was effective in providing input to the first Six Year Plan. In addition, the Forum endorsed the RTA’s Final Plan, “Sound Move,” and provided joint recommendations to King County Executive Gary Locke concerning 1997 and 1998 transit service priorities.

By 2001, participation in the Forum waned, and only a few elected officials attended meetings. As a result, invitations to participate in the Forum were extended to other cities in east King County and south Snohomish County to address cross-county and King County issues. Woodinville, Mountlake Terrace, and Edmonds responded and became members of the Forum. Recommendations from the group continued to be developed by consensus.

To fulfill its mission, SeaShore adopted the following goals in May 1997: 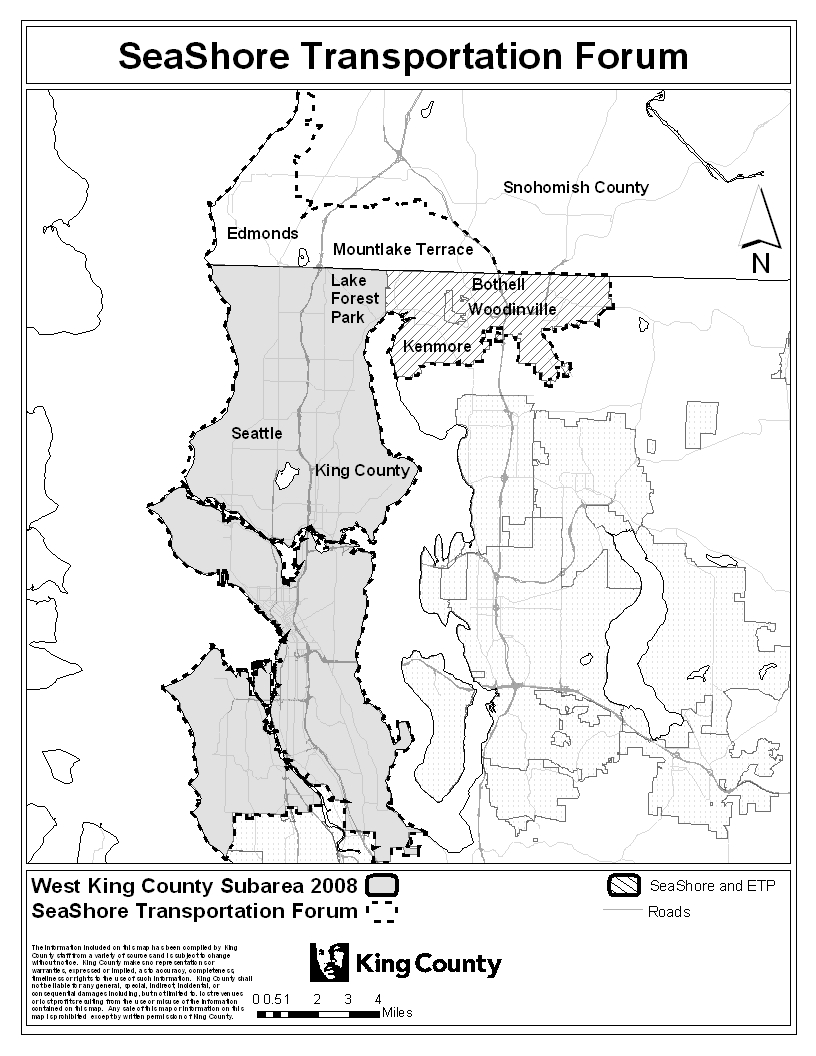