Metro's new three-story garage at a busy Eastside park-and-ride near SR-520 is open for commuters. The garage on the Bellevue-Kirkland border opened Sept. 5 and has 530 parking spaces, plus 260 spaces in the surface parking lot. The lot used to have about 600 spaces, and will top out at 850 spaces next year once construction is complete on the mixed-use housing project next door. 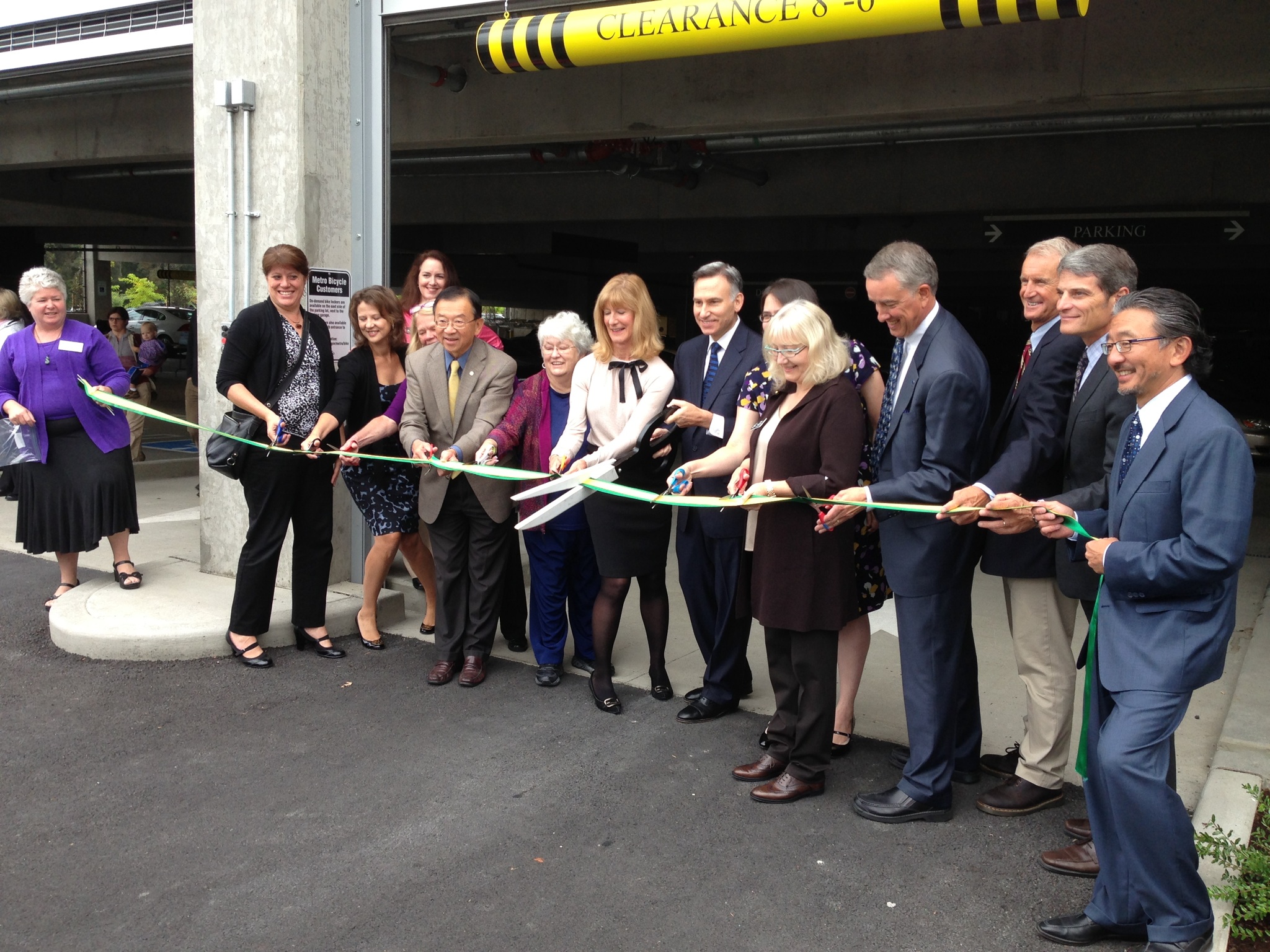 A new three-story garage at a busy Eastside park-and-ride near State Route 520 is open for commuters, and today officials marked the milestone at a ceremony where they also highlighted the need for stable ongoing transportation funding.

“The riders streaming into this hub are visible evidence of the growing transit demand here on the Eastside,” said King County Executive Dow Constantine. “People and businesses need bus service, and we must stay focused on getting stable funding that averts the drastic service cuts on the horizon.”

Metro Transit's new three-story garage on the Bellevue-Kirkland border opened Sept. 5 and has 530 parking spaces, plus 260 spaces in the surface parking lot. The lot used to have about 600 spaces, and will top out at 850 spaces next year once construction is complete on the mixed-use housing project next door. Together, the garage and housing comprise a so-called transit-oriented development (TOD), successfully concentrating housing and a transit hub to reduce the need to drive or own a vehicle.

King County provided $8.8 million in funding toward building the transit center and garage, largely from grants by the Federal Transit Administration and the state Department of Transportation. Developer Polygon Northwest received funding and the housing parcel in compensation for building the garage and transit center.

For Seattle and Eastside job centers, the location is central along State Route 520, which has seen 25 percent growth in ridership due to increased service and demand since 2010.

“This innovative and integrated transit oriented development will take cars off the road, prepare us for the transition to the new SR 520 bridge and provide affordable housing opportunities for those who live and work in the area,” said King County Councilmember Jane Hague.

The garage has seven of nine planned electric vehicle spaces with charging stations and two rows of bike racks. Security cameras are located on each floor of the garage. The park-and-ride serves Metro routes 234, 235, 249, 255, 981, 986 and Sound Transit Route 540. The project was built using grants from WSDOT and the FTA as part of the innovative Urban Partnership program with WSDOT, Puget Sound Regional Council and Sound Transit.

Collaboration between government agencies is making the project a reality, said Kirkland Mayor Joan McBride. “It’s projects like this that benefit cities, counties and the state, but there won’t be transit use if there is no transit funding. We need the legislature to pass a transportation package because our economy and quality of life depend on it.”

The mixed-income, mixed-use housing development will include 243 apartments and is slated to open for initial occupancy in fall 2014. Polygon Northwest is building 185 residences, approximately 7,000 square feet of retail, and 287 additional parking spaces for residents. Local non-profit affordable housing developer Imagine Housing and its affiliate, Red Vines 1, will build and operate 58 affordable residences.

“Public transportation is contributing to a better quality of life on the Eastside, and the local economy is thriving because transit has kept the region moving,” Bellevue Mayor Conrad Lee said. “I hope that this improvement attracts new riders as Bellevue and Kirkland continue to grow in jobs and new residents.”