Metro bus operator Jeffery Jackson, for his focus on safety and customer service with riders, was chosen from among Metro Transit’s 2,700 bus operators to be this year’s Metro Transit Operator of the Year.

Every day, Metro bus operator Jeffery Jackson navigates his bus through heavy downtown Seattle traffic, traveling along a twisting and turning web of overhead wires. It’s careful methodical work, and he cautions his fellow electric trolley bus drivers to “take it easy and don’t get in a hurry.”

For his focus on safety and customer service with riders, Jackson was chosen from among Metro Transit’s 2,700 bus operators to be this year’s Metro Transit Operator of the Year. Jackson, 58, was honored with this year’s award in a surprise ceremony today. 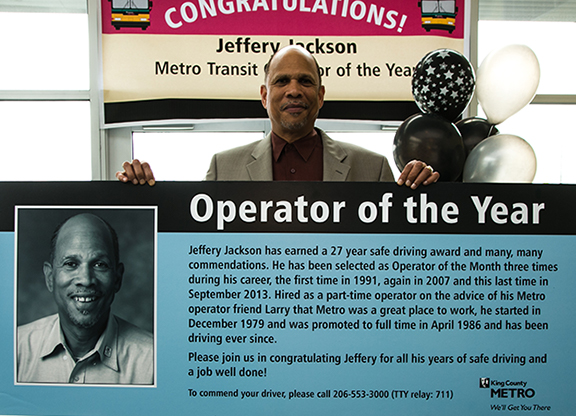 Jackson was chosen by his fellow operators from among Metro’s 84 “Operators of the Month” who were eligible for the “Operator of the Year” award. Winners are Metro’s elite top drivers and the best of the best.

Jackson, 58, lives in Seattle’s Central District and drives buses out of Metro’s Central-Atlantic Base in Seattle. He was born in Portland and moved to Seattle in 1970, graduating from Garfield High School in 1974 and attended Shoreline Community College. He first joined Metro as a part-time operator in 1979, shifting to full-time work in 1986. He soon will receive a 29-year safe driving award.

“He’s a top performer from among our thousands of drivers,” said Metro Transit General Manager Kevin Desmond. “We are proud of his service and pleased to honor him with this year’s award.”

Commendations and kudos from customers say Jackson is a “fantastic” operator, “very professional and courteous” who “waits for customers when they are running to the bus stop.” Jackson is a three-time operator of the month: March 1991, March 2007 and September 2013.

“Jeff is recognizable as one of the nicest people you’ll ever meet,” said Metro Transit Operations Manager Jim O’Rourke. “He usually has something positive to say and he’s usually smiling. I’m not at all surprised that his fellow operators elected him.”

Praise for Jeff Jackson from riders

Since 1979, the drivers themselves have selected the best of their peers to hold the title of Metro Transit’s Operator of the Year. They are rated on excellence in safety, customer service, and service to their fellow operators. In order to receive the award, a driver must first be chosen Operator of the Month from one of the seven transit bases. At the end of the year, the Operator of the Year is selected by a vote of all fellow Operators of the Month. The annual ceremony is usually held the following summer.