Eight transit agencies across Washington are working together on a pilot project to test and analyze a collision avoidance system that could help bus drivers reduce the number and severity of collisions with pedestrian, cyclists and vehicles. 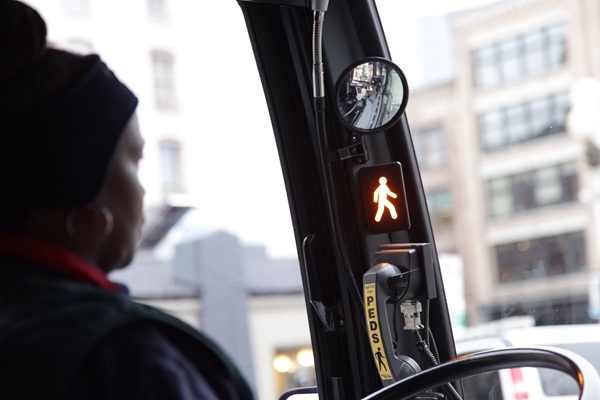 UW to analyze results as eight transit agencies partner together to reduce collisions with pedestrians, cyclists and vehicles

Eight transit agencies across Washington are working together on a pilot project to test and analyze a collision avoidance system that could help bus drivers reduce the number and severity of collisions with pedestrian, cyclists and vehicles.

The driver assistance technology, called Mobileye Shield+ by Rosco Vision Systems, uses four bus-mounted vision sensors to identify and alert bus drivers when pedestrians, cyclists or vehicles are in close proximity to a bus, and warn them in time to take action to prevent a possible collision. The system will be deployed on 38 buses statewide, with three buses in operation for Metro Transit, and five buses each for Community Transit, Pierce Transit, Intercity Transit, C-Tran, Kitsap, Ben Franklin and Spokane Transit.

The pilot project is jointly funded by the Washington State Transit Insurance Pool, its member transit agencies, King County Risk Management, and insurance companies serving the transit industry. Also, the Transportation Research Board through an Innovation Deserving Exploratory Analysis (IDEA) grant is funding the cost of the pilot program evaluation.

“By working together, we will have a stronger understanding and analysis of how well collision avoidance technology can work for transit agencies – and find ways to continue to reduce the number and seriousness of pedestrian collisions,” said Metro Transit General Manager Kevin Desmond.

“WSTIP and its members look forward to partnering with King County Metro to pilot and evaluate the Mobileye Shield + collision warning system which may potentially mitigate the frequency and severity of collisions with pedestrians, cyclists and vehicles,” said WSTIP Executive Director Al Hatten.

Each of the buses used in this test are 40 feet long and outfitted with four vision sensors, which trigger warning alerts to drivers. The system scans for pedestrians and bicyclists, and visual displays and an audio warning alerts drivers of imminent collisions before they occur, providing the driver time to take evasive action. The system also monitors following distance, warns drivers of an imminent rear-end collision, alerts drivers if their bus strays from its lane of without an active turn signal, and notifies drivers if the bus exceeds the posted speed limit.

Data collected from the four-month test period will be evaluated and analyzed by STAR Lab (Smart Transportation Applications and Research) an ITS research program that is part of the Department of Civil and Environmental Engineering in the College of Engineering at the University of Washington. Feedback from transit operators will be part of the evaluation.