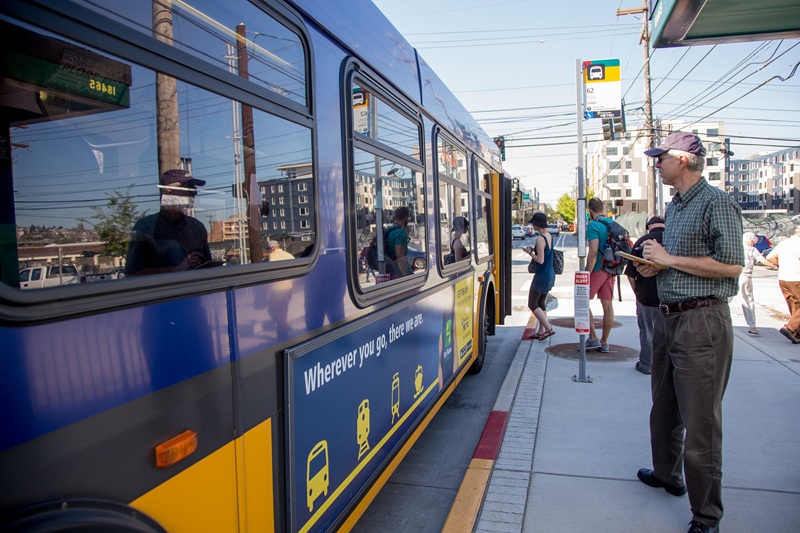 The changes draw on service hours Metro set aside as part of the major restructure of bus service March 26, which improved frequency and reliability on dozens of Metro routes serving Northeast Seattle and Capitol Hill and improved connections for riders to access new Link light rail stations at UW and Capitol Hill.

Metro has been monitoring service since the changes were implemented, including having staff in the field to count passengers and observe trips as well as listening to feedback from customers. These additional bus trips are the first in our ongoing effort to fine-tune service as needed within available resources to respond to ridership demand.

“We’re delivering more bus service to keep up with the growing demand for transit that connects to high-capacity light rail,” said Executive Constantine, who is also Chair of the Sound Transit Board of Directors. “By tracking ridership data and listening to passengers, we will add trips that reduce crowding and increase reliability.”

“Tens of thousands of riders are using the new, revised transit network to commute, travel between neighborhoods and make connections to Link light rail every day,” said Rob Gannon, Metro Transit Interim General Manager. “After launching these changes, we are closely monitoring how the service is working for our customers, and based on feedback from riders and planners, adding targeted trips to help ease crowding and make for a better rider experience. We’ll continue to monitor and listen to customer feedback, and fully expect ridership to continue to grow.”

The changes will account for about one-third of the hours set aside for adjusting service. More adjustments will be considered in the coming weeks.

Since the service change, Metro heard the most customer comments regarding weekday crowding on Route 28X.  Route 28 and 28X were combined, and Route 28X now provides two-way, all day service via Aurora Avenue and North 39th Street in Fremont. Though it was scheduled with 10-minute service from 7-8 a.m. on weekdays, transitioning to 15-minute service at 8 a.m., rider demand shows it needs additional trips to serve riders trying to arrive in downtown Seattle in the weekday morning rush hours. New morning trips will be targeted between 7 and 9 a.m. to serve the portion of the route south of Holman Road.

Due to high weekday rider demand in the 5 p.m. travel window, when trips were scheduled 10 minutes apart, Metro is moving to add one trip and group together three trips to leave about 6 to 7 minutes apart.

Metro received a large amount of feedback from weekday riders on the new Route 62, which travels in Northeast Seattle and replaces part of the deleted Route 16, traveling between Greenlake and Downtown Seattle via Wallingford, Fremont and South Lake Union. Though scheduled every 10 minutes until about 8 a.m. and every 15 minutes thereafter, crowding is apparent – especially on the southern half of the route.

To address this, Metro will add two weekday morning peak trips serving the part of the route west of I-5 during the 7-8 a.m. window to help ease crowding.

Metro received complaints from Route 373 riders who were not able to connect with Link light rail at UW Station earlier in the morning, and staff have seen standing loads on all morning Route 373 trips. To help riders better make this connection, Metro will add a trip departing Aurora Village Transit Center at 5:45 a.m. weekdays – 15 minutes earlier than the previously scheduled 6 a.m. start of service. Schedulers will work to even out the time between weekday morning trips so they are closer to every 20 minutes instead of 25 minutes.

Because of changes to the Route 373, the northbound Route 73 also will have a new earlier trip because the two trips use the same bus. This means the first northbound Route 73 trip will be scheduled to leave University of Washington Station at about 6:30 a.m.

In addition to the routes identified for changes, Metro also is monitoring performance in the field and analyzing reports from riders about crowding and delays at various times of the day on routes we’re hearing concerns from customers. We’re particularly focused on Northeast Seattle commuter routes as rider patterns and behavior are changing as they become accustomed to new options. Metro will consider targeted improvements within available resources, once consistent crowding or reliability issues have been confirmed.

Riders seeking help to understand and use the new transit network in their communities can visit Metro online or contact Metro customer service at 206-553-3000. Transit customers can also visit the Puget Sound Trip Planner App which helps riders plan their trips and see next bus departures for nearby stops.