Known for her safe driving, quick wit and ability to brighten the days of her riders and coworkers, bus driver Vicki Leslie today was named King County Metro Transit Operator of the Year. 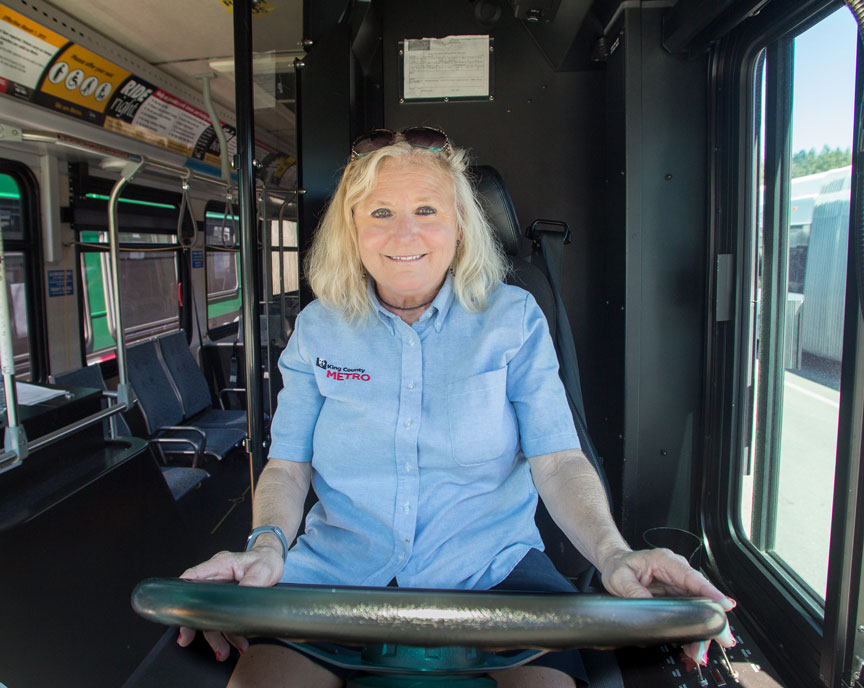 “Try to stay positive, one day at a time, one trip at a time and enjoy your free time doing whatever makes you happy.”

Known for her safe driving, quick wit and ability to brighten the days of her riders and coworkers, bus driver Vicki Leslie today was named King County Metro Transit Operator of the Year.

Metro officials and fellow bus drivers praised Leslie during a surprise ceremony in Bellevue, echoing commendations she received from customers over the years. Leslie has been driving Metro buses since 1981.

“Vicki is an extraordinary employee who gives her very best every day on the job – to her riders and to her co-workers,” said King County Executive Dow Constantine. “She is exceptionally deserving of this recognition, and a great example of how King County provides truly top-notch customer service.”

Leslie works from Metro’s Bellevue Base and pilots Routes 236 and 238 weekdays, enthusiastically shuttling customers between Woodinville, Bothell and downtown Kirkland. She knows many of her regular riders and connects with them as a part of their daily commuting ritual to work or back home. During her time driving for Metro, she has earned her 33-year safe-driving award.

“Vicki Leslie represents Metro’s finest. When she is behind the wheel, she is dedicated to safety, and at the same time radiates a joyful attitude that improves the lives of her riders and our community,” said Metro Transit Interim General Manager Rob Gannon. “We’re thrilled her fellow operators selected her for this honor.”

Metro Transit has approximately 2,700 transit operators, and Leslie was chosen from among her fellow 84 “Operators of the Month” who were eligible for the “Operator of the Year” award. Leslie qualified for this year’s top honor after being named a Metro Operator of the Month in March 2015, her fourth such honor since she began her career at Metro, with previous monthly awards in 1994, 2001 and 2007.

Leslie was born in Yakima and moved to Edmonds during elementary school. She graduated from Meadowdale High School and went to trade school, learning to read blueprints and how to weld. She raised two sons, and when not driving for Metro, Leslie spends time with family and friends, enjoys traveling and exploring the great outdoors of the Pacific Northwest.

Praise for Vicki Leslie from riders

About the award
Since 1979, the drivers themselves have selected the best of their peers to hold the title of Metro Transit’s Operator of the Year. They are rated on excellence in safety, customer service, and service to their fellow operators. In order to receive the award, a driver must first be chosen Operator of the Month from one of the seven transit bases. At the end of the year, the Operator of the Year is selected by a vote of all fellow Operators of the Month. The annual ceremony is usually held the following summer.