Metro Transit announced that James Turner is the Transit Operator of the Year. Chosen by his peers, he represents the best of Metro’s 2,800 bus drivers, who carry nearly 122 million riders each year. Turner’s family also drives for Metro, including his sister, son, daughter, cousin and four nieces. 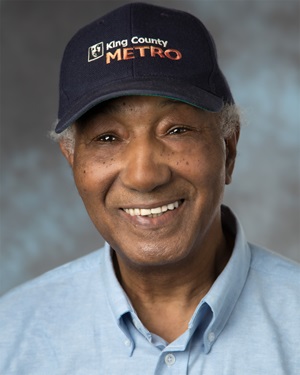 Quick as a wink, he climbs out of the driver’s seat to help a passenger with her grocery bags. Riders know him by his cheerful smile and say he’s friendly and courteous, and that he looks out for riders who are older and need a helping hand. He even eases the stress riders feel when the whole bus is stuck in congestion.

Meet James Turner. At a surprise ceremony today, Metro officials, Turner’s fellow bus drivers and his family shared stories of his kindness and kudos from riders spanning 35 years as he was named Metro Transit Operator of the Year.

As he was praised for the thoughtful and considerate way he treats riders, Turner, 70, shared the same smile that riders say brighten their day. Turner currently drives electric trolley bus Routes 2 and 12 through downtown Seattle.

Turner was hired as a part-time transit operator in August 1982 and became a full-time driver in May 1986. He earned a 28-year safe driving award, received 29 commendations and was named operator of the month in June 2016, August 2007 and July 1992.

Turner was born in Shreveport, La., and moved to Seattle. He attended Horace Mann Elementary and Washington Junior High. He graduated from Garfield High School in 1965 where he played football and baseball. Turner attended Seattle Community College, Seattle University and University of Washington.

Turner’s advice for other operators is to “love what you do and do what you love. Life is short.”

Metro Transit has approximately 2,800 transit operators, and Turner was chosen from among his fellow 84 “Operators of the Month” who were eligible for the “Operator of the Year” award.

“Like all our Metro operators, James takes public service seriously. But he goes a little bit farther, creating a community space on his bus that is friendly, inclusive, and relaxing. He shares his dedication to helping people get around the region with his family – eight relatives including his sister, son and daughter drive for Metro. James says he loves what he does, and for 35 years, riders have loved that he does it.” – King County Executive Dow Constantine

“Throughout his 35-year career, we’ve heard time and again how James respects the needs of riders of all ages and backgrounds. He is a shining example of the best customer service that Metro provides and we’re proud to honor him as Metro’s Top Driver and our Transit Operator of the Year.” – Metro Transit General Manager Rob Gannon

What riders say about James Turner