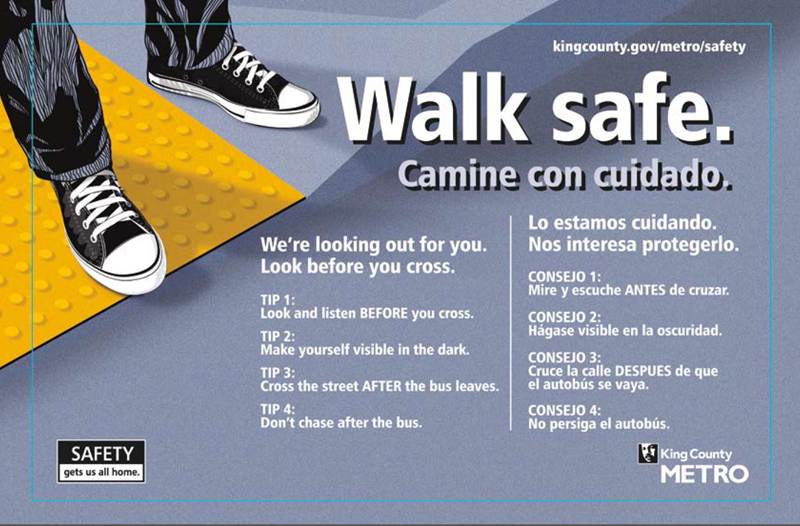 King County Metro leaders and transit drivers are distributing “Walk safe” pedestrian safety tip cards as part of the agency’s campaign, “Safety Gets Us All Home.” Metro’s overall goal is to reduce the number of collisions to zero, and chief among them eliminate pedestrian collisions.

“We care about our community and want everyone to get home safely, and our goal is zero pedestrian collisions. Each of Metro’s nearly 3,000 transit drivers is focused and vigilant, working to avoid pedestrian accidents every day,” said King County Metro General Manager Rob Gannon. “We hope our awareness campaign helps us reach our zero-collision goal.”

Pedestrian impairment and driver distraction are the largest contributing factors in pedestrian collisions, according to the state Traffic Safety Commission’s Pedestrian Safety Advisory Council reports. Metro serves on the advisory council alongside the City of Seattle, police departments across the state, and pedestrian advocates from Feet First. Pedestrian safety is a priority in the state’s Target Zero and the City of Seattle’s Vision Zero campaigns.

“We don’t want anyone to have to receive that phone call, to learn that their loved one has been hurt or killed while walking. That’s why we are all focused on preventing injuries and saving lives wherever and whenever we can. Metro’s efforts to raise awareness among drivers and pedestrians can help us look out for each other to reach Target Zero,” said Darrin Grondel, Washington State Traffic Safety Commission Director.

Tip cards, posters, and bus ads will remind riders not to chase buses, to look and listen before crossing streets, to become more visible to drivers when crossing in the dark, and to cross the street only after their bus leaves the bus zone.

Several minor pedestrian injuries occur each year when riders chase after a bus. Metro continues working to raise awareness of the dangers of running alongside a moving bus, and hopes that recent and planned increases in transit service help riders make the decision to let a bus go and wait for the next one.

“It’s great that people are walking more and using transit, getting around without adding to traffic,” said Julia Reitan, director of Seattle-based pedestrian advocacy group Feet First. “Metro’s goal to get everyone home safely is right on target.” 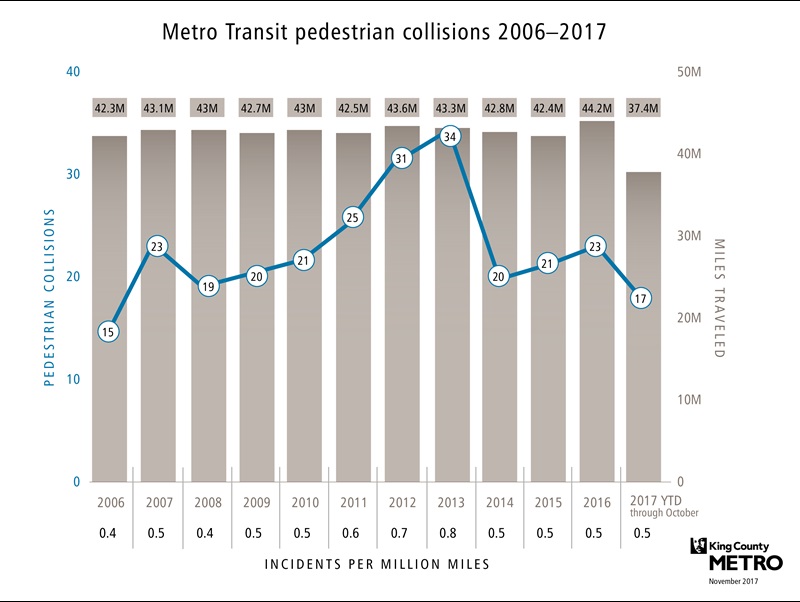 Metro safely carries over 400,000 bus riders daily and more than 121 million rides annually. So far this year, Metro has been involved in 20 pedestrian incidents. These ranged from pedestrians walking into the side of a bus and walking away uninjured, to injury or fatality collisions. From 2012 to 2017, Metro buses were involved in 148 pedestrian collisions while traveling more than 250 million miles.

Metro has reduced the number of pedestrian collisions in recent years; however, this year we experienced a fatality pedestrian collision while operating Route 26 on Nov. 10 and on Sound Transit Express Route 554 on Oct. 12. Other recent pedestrian fatalities occurred on Nov. 7, 2016, on May 3, 2016, and on Dec. 3, 2015.

Though Metro travels more than 40 million miles each year and approximately 2 million miles between pedestrian collisions, the entire organization is focused on completely avoiding pedestrian collisions through training, street and intersection design, and rider awareness. Technology to help transit operators avoid collisions continues to evolve, and Metro has tested turn warning and Shield Plus pedestrian systems, although we have not identified a system that meets our needs.