As expansion of the Washington State Convention Center continues, the bus stops at Convention Place Station will relocate to Ninth Avenue on July 21. Buses are expected to continue to operate in the Downtown Seattle Transit Tunnel through March 2019, when it will be used exclusively for Link light rail service. 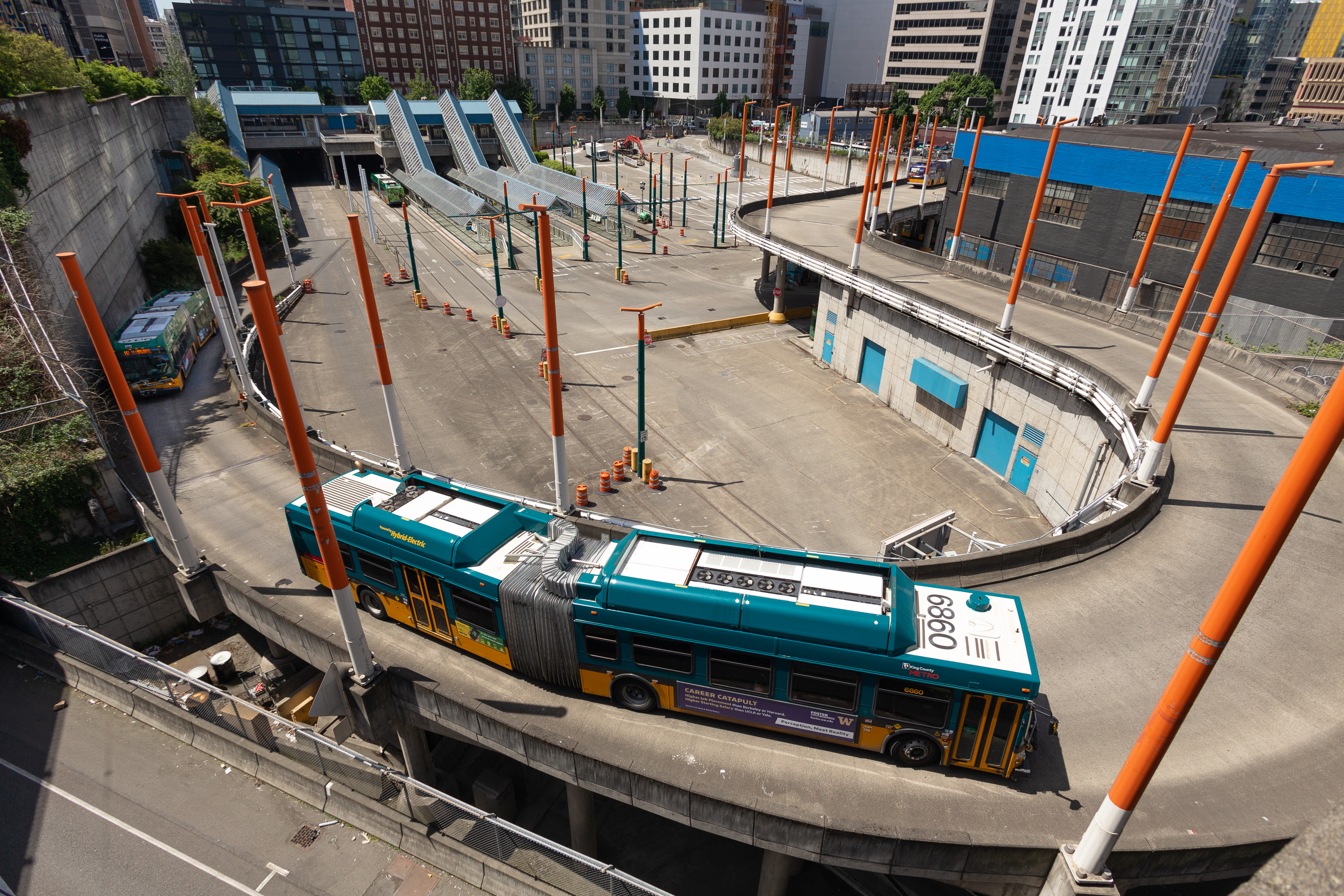 Bus stops at Convention Place Station will be relocated to Ninth Avenue on July 21 as expansion of the Washington State Convention Center continues. Meanwhile, buses will continue to operate in the Downtown Seattle Transit Tunnel through March 2019, when it is expected the tunnel then will be used exclusively for Sound Transit Link light rail service.

Under a longstanding plan, the tunnel will transition from joint bus-rail operations to rail-only operations in time for the start of light rail service to Northgate in 2021 and Bellevue and Overlake in 2023. Additional Link extensions that will connect to the tunnel are scheduled for Lynnwood and Redmond in 2024. These changes will benefit thousands of daily riders who use the Downtown Seattle Transit Tunnel. Shifting to rail-only operations will improve transit capacity in the tunnel, resulting in more frequent, reliable light rail service.

King County agreed to sell the Convention Place Station property for $275 million in principal and interest over 32 years. The funds will support Metro operations and capital projects.
The property will be used for expansion of the Washington State Convention Center.

The Washington State Convention Center expansion is expected to generate about $260 million in visitor spending and more than $19 million in tax revenue annually. Three years of construction will create nearly 6,000 family-wage jobs in the region, and once open the facility will be supported by 3,900 new, ongoing jobs. Plus, as part of its public benefits package, the Convention Center will fund more than $93 million in community priorities including affordable housing, downtown open spaces, bike lanes and more.

The Pine Street Group, developers of the Convention Center expansion project, notified King County last week that they had obtained required permits to meet the first criteria necessary for bus operations to discontinue in March 2019.

King County will monitor the progress of the convention center expansion project. A second and final milestone is required by Sept. 30, 2018, notifying King County that demolition is underway on the site and WSCC will take possession of the Convention Place Station property by March 2019.

To make sure buses can continue to access the DSTT through March 2019, buses will operate two-way on Ninth Avenue, thanks to efforts to reconfigure the street by the Seattle Department of Transportation. Also, buses will have sole access from the Interstate 5 Express Lanes ramp to Convention Place roadway, the street that travels beneath the convention center at the intersection of Pike Street and Ninth Avenue and quickly connects morning buses and riders from the Interstate 5 Express Lanes with Union Street.

King County Metro and Sound Transit are working with the City of Seattle and the Downtown Seattle Association on street and public realm improvements designed to improve traffic, bus operations and the pedestrian experience across the downtown. A near-term action plan outlines $30 million in improvements to help people continue to move easily through the downtown core even as major public and private construction projects – such as the Convention Center addition – are underway in the coming years.

Some projects are focused on improving bus service, such as expanding the transit-priority hours on Third Avenue in September 2018. Other projects are slated to come online in 2019, including off-board payment kiosks to speed boarding on Third Avenue and a new transit pathway on Fifth and Sixth avenues to maintain transit travel times, both in March 2019. Metro, Sound Transit and the Seattle Department of Transportation are monitoring the progress on these projects with the goal of completing them quickly and effectively to benefit transit riders and other travelers to downtown Seattle.

“The integrated bus and rail network continues to evolve with the end goal of better serving riders, and we continue to expand service to meet growing demand. Riders want service that is frequent, reliable and easy, and we’re working with our partners on projects to keep us all moving together through the downtown core.” -- King County Metro General Manager Rob Gannon

“This important work will ultimately transform the tunnel into a regional hub that will connect well over a million daily riders to a 116-mile light rail network when voter-approved system expansions are complete.” -- Sound Transit CEO Peter Rogoff