King County Metro announced today a first-ever three-way tie for Operator of the Year. Selected by their peers, they represent the best of Metro’s 3,000 bus drivers, who carry nearly 122 million riders across Seattle and King County each year. 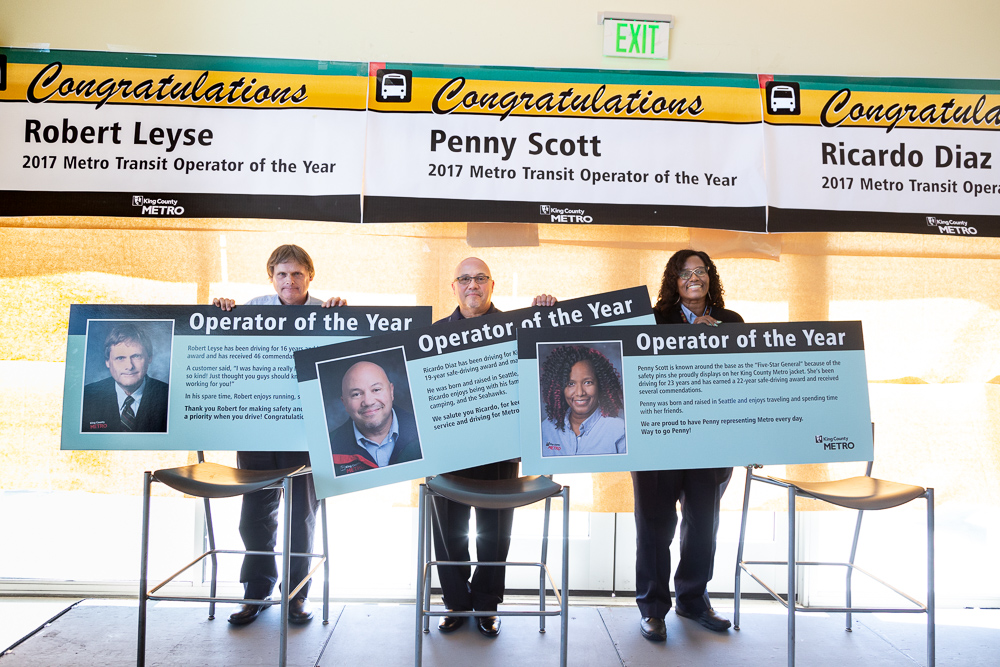 Ricardo Diaz, Penny Scott and Robert Leyse walked into cheers and applause at a surprise ceremony today at Atlantic-Central Base where they were named King County Metro’s Transit Operators of the Year.

Each year since 1979, Operators of the Month are selected from each of Metro’s seven bases, who later are responsible for selecting an Operator of the Year from among them. In nearly 40 years, there has never been a tie between three operators. Metro had two-way ties for Operator of the Year in 1994, 1997 and 2007.

Having three operators of the year makes Metro shine all the brighter as the agency prepares this month to receive its Outstanding Public Transportation System Achievement Award – aka No. 1 transportation system in North America – from the American Public Transportation Association. Coincidentally, this is the third time Metro has received that honor as an agency, having previously received it in 1983 and 1992.

Together, the three Operators of the Year have 66 years driving experience with Metro.

Ricardo drives Route 4 at night in Downtown Seattle. He was hired as a part-time transit operator in October 1991 and went full-time in March 1996. He has earned a 19-year Safe Driving Award. Ricardo was also Operator of the Month in September 1999 and August 2017. Diaz formerly worked for a phone company and is a veteran of the U.S. Army. He was born and raised in Seattle, and has a wife, two daughters, and four grandchildren. He enjoys being with his family, listening to music, gardening, home projects, camping, and cheering on the Seahawks.

Ricardo’s advice for other operators is: “Try to practice peaceful behaviors, it’ll take the edge off. Be forgiving of yourself and others. Seek the wisdom of others. It’s not all luck that helps you achieve longevity.”

Penny drives Route 125 between Downtown Seattle and West Seattle and Route 128 from West Seattle to White Center and Tukwila. She was hired as a part-time transit operator in July 1995 and went full-time in March 2001. She has earned a 22-year Safe-Driving Award and received several commendations. She was named Operator of the Month in October 2017. Penny was born and raised in Seattle, and graduated from Garfield High School in 1991. Penny is known around the base as “The Five-Star General” ...because of the safety pins she proudly displays on her Metro jacket. Penny has two grown sons, Johnathan and Dorian. In her spare time, Penny enjoys traveling and spending time with her friends.

Robert drives route 246 between Eastgate and Bellevue and Clyde Hill, and Route 235 on Sundays between Kenmore, Kirkland and Bellevue. He was hired as a part-time operator in September 2002 and went full-time in March 2003. He has earned a 10-year Safe Driving Award and received 46 rider commendations. He was Operator of the Month in July 2017. He is known for his enthusiastic attitude, excellent driving skills, good judgement, and first-class customer service to our riders. Robert has lived most of his life in the Bellevue area. He attended Sammamish High School and Bellevue Community College. During his time off he enjoys running, swimming, and the outdoors.

“The fact that we had a three-way tie for this year’s Operator of the Year honor shows just how many outstanding employees we have at King County Metro,” said Executive Constantine. “It is dedicated professionals like Ricardo Diaz, Penny Scott, and Robert Leyse who helped us earn this year’s award for best large transit system in North America.”

“Being the Best of the Best at Metro means a little bit more this year as we lead the nation in ridership gains and also as APTA’s Best Transportation Agency in North America. We couldn’t be more proud to honor our top operators, and are grateful for the dedication and focus they bring to their work each day.”
– Metro Transit General Manager Rob Gannon