After careful planning and evaluation of options, King County Metro and SDOT announced today that West Seattle and Burien-area bus routes heading south will move off First Avenue and instead use Second Avenue to connect to Fourth Avenue beginning Monday, September 9, 2019.

This service revision comes after Metro and SDOT evaluated alternate pathways and worked to prioritize bus traffic through the city’s central business district. SDOT has implemented signal timing changes on First Avenue to keep northbound and southbound traffic moving and will continue to monitor current conditions. Buses using Second Avenue to connect to Fourth Avenue South will have a second left turn lane from Columbia Street to Second Avenue. These changes were deemed necessary in order to adequately address the flow of traffic along the pathway.

Northbound buses will remain on the First Avenue pathway until Alaskan Way opens in early 2020, except for a temporary short-term reroute for when Dearborn Street is closed for viaduct demolition. Northbound routes using SR99 will be on temporary reroute between September 12-21 and will take Fourth Avenue South with stops at Prefontaine Place South and James Street.

Ensuring reliable transit in and out of downtown is a priority during the “Seattle Squeeze,” the period over the next five years as Seattle’s downtown continues to change to meet the needs of a growing city. Regional transportation partners including the Seattle Department of Transportation, the Washington State Department of Transportation, King County Metro, Sound Transit, and the Port of Seattle are all working together to keep people and goods moving safely to and through downtown.

Travelers should continue to plan ahead, adjust travel times when possible, prepare for impacts to downtown traffic, and exercise patience. As always, we encourage people to walk, bike, or take public transit whenever possible. 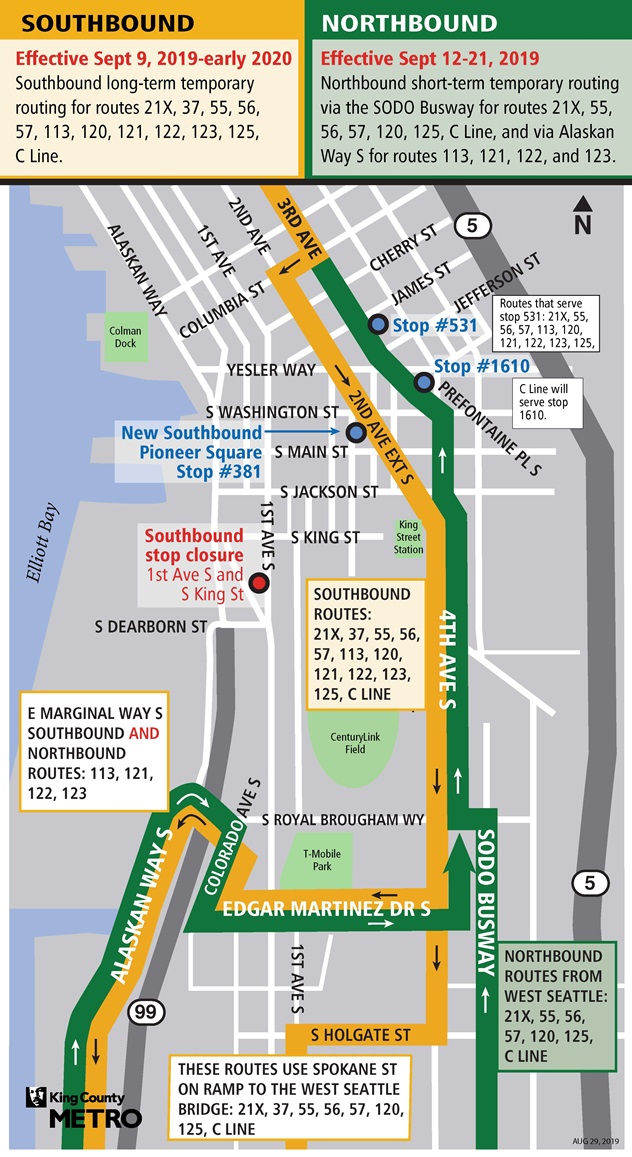 “Ongoing construction and disruption on the waterfront hurt Metro’s ability to move people quickly and efficiently to and from West Seattle and Burien, particularly in the evening commute. We directed resources to come up with alternative routes and traffic improvements. Running buses on Second and Fourth avenues should improve speed and reliability, and we will continue to make needed adjustments to make sure Metro is the best way to get around during the Seattle Squeeze, and beyond.”

“During these first few chapters of the Seattle Squeeze, our entire region has come together to be part of the solution and help make room on our roads. Working closely with Metro, the City continues to work to keep transit, people and goods moving. As we’ve closely monitored transit and travel times on 1st Avenue, we have seen the big impact it’s had on commuters. That’s why I asked the Seattle Department of Transportation to work with Metro to identify alternatives to 1st Avenue, including new routes. We are also making investments in signal timing, bus-only lanes, and more Metro service that will help keep people and transit moving during this new era of tough traffic,” said Seattle Mayor Jenny A. Durkan. “The City of Seattle will continue working closely with our partners at King County Metro to make sure our roads are working as well as possible for buses during this new era of tough traffic.”

“To say the Seattle Squeeze has been rough on those of us who rely on bus service from downtown to West Seattle and Burien is an understatement. We must strive and expect to be a responsive and nimble government and this is a needed adjustment to address the challenges we’ve experienced this summer. I appreciate the collaboration between King County Metro and Seattle Department of Transportation for developing this thoughtful solution, and look forward to working with both departments to track our commute experience in the coming months.”

"West Seattle bus commuters have been contacting me about this crunch and I've worked since April to find alternatives. I appreciate Metro, SDOT, the County Executive and the Mayor working to find a cost-effective solution for our bus system, and mitigates any potential obstructions to our Fire Department and emergency responders."