King County Metro announced in a surprise ceremony today that the Operator of the Year is Neal Safrin, whose commitment to excellence in safety, customer service, and service to his fellow operators represents the best of Metro. 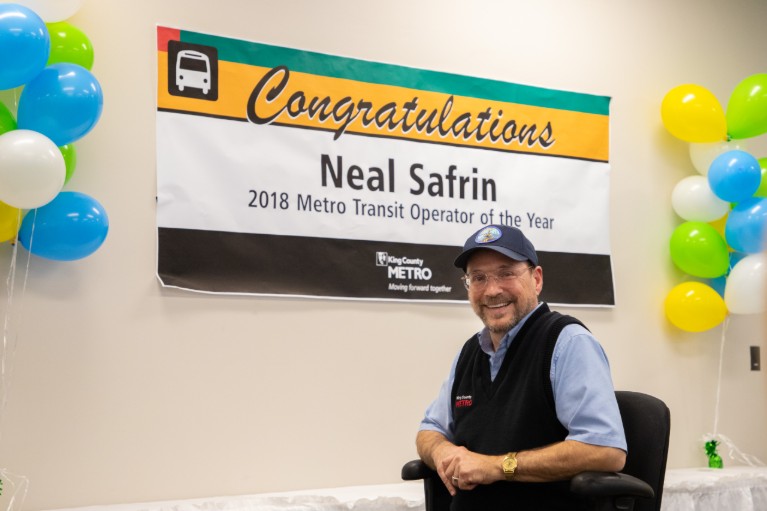 Safrin, 64, joined Metro in 1988 and is a report operator at North Base in Shoreline. Riders have seen his smiling face behind the wheel on dozens of bus routes across King County for decades.

“The entire King County family could not be more proud of Neal and his 31 years of faithful service to the public,” said King County Executive Dow Constantine. “Neal’s commitment to the customer is reflected in the commendations he has received for being helpful and courteous, and his care in serving customers who need it most.”

Safrin was selected as Operator of the Month in February 2018. He is very active in Amalgamated Transit Union Local 587 and served as a Shop Steward, Executive Board Officer and Vice-President. He has worked at six of Metro’s seven operating bases, spending most of his career driving buses from North and East Bases. He has served on both the Base Safety and Security committees as well as serving as one of the North Base representatives on the Comfort Station Operator Committee.

“Neal is a friendly face at every base he works at, someone who is focused on improving safety and security with and for his fellow operators,” King County Metro General Manager Rob Gannon said. “I have known Neal as a union officer, a transit operator, and a special project manager—no matter the role, he is by all accounts an outstanding colleague. His mentorship and coaching for new operators have helped improve the quality of our service to the public and for that we are all grateful.”

Neal’s advice to fellow operators shows his attention to safety and the need to be vigilant behind the wheel: “Pay close attention to your surroundings while driving. Look several times before you make a move; traffic situations can change in the blink of an eye.”

Each year since 1979, Operators of the Month are selected from each of Metro’s seven bases, and later those 84 operators are responsible for selecting an Operator of the Year from among them.

Safrin was born and raised in New York City. He earned a bachelor’s degree in Environmental Studies at Western Washington University and worked as a Foreign Fishing Observer for the National Marine Fisheries Service, stationed in the Bering Sea on Japanese and Korean fishing vessels for up to three months at a time.

Neal recently celebrated 32 years of marriage with his wife, Patty, and enjoys fishing and hiking and hopes to increase the amount of time that he spends outside in the coming years. He also looks forward to spending more time with his wife, who recently retired.