Skip to main content
Animals, plants and habitat Beavers in King County
Problems and solutions
About Peterson Pond and Facility

This narrative presents an example of an engineered solution to living with beavers in King County. In it we describe the design and installation of a “beaver deceiver” at Peterson Pond in King County, Washington. A PDF version of this information plus additional photos showing the entire construction process can be found here. 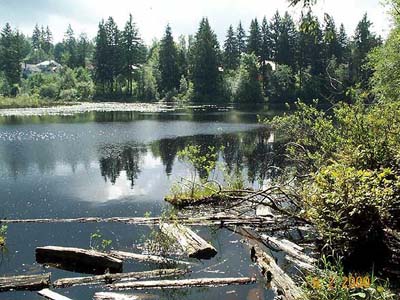 Peterson Pond, also known as Swan Lake, is located east of the City of Redmond near the intersection of Union Hill Road and 238th Ave NE. The pond is approximately 9 acres in size, and is located at the headwaters of Evans Creek, part of the Lake Washington watershed. The drainage basin for Peterson Pond is about 800 acres in size, with two main tributaries to the pond.

Prior to construction of the existing facility, the outlet to the pond consisted of an uncompacted earthen dike with two box culverts. The dike and culverts had been in place since the early 1900s. The current outlet of the pond was constructed in 1988 and consists of an outlet control structure and fish ladder, and the dam has been replaced.

Resident trout and other fish inhabit the pond, which also provides habitat for waterfowl, amphibians, and beavers. Past studies have documented salmon spawning downstream of the outlet. A culvert replacement at a nearby road crossing removed a barrier to fish passage. Fish habitat in the area has been documented as moderate to high quality.

Peterson Pond is owned by the Swan Lake Estates Homeowners Association. There is no public access to the pond or fish ladder facility. Additional information about this small lake can be found at the King County small lakes website.

Description of the Stormwater Control Facility at Peterson Pond

The culverts in the original dike had become blocked by debris over the years, causing the dike to overtop and erode. Because significant property damage could occur if the dam failed, King County staff decided to replace the dike with a new structure, including replacing the earth dam and constructing an outlet control structure and fish ladder. The facility is maintained by King County Stormwater Services as a regional stormwater facility.

The control structure is a concrete channel and contains a weir and shear gate to control the outflow. The fish ladder was provided because of the documented presence of salmon downstream of the pond outlet. Also, a submerged bypass pipe extends into the pond and drains to the control structure. This pipe was intended to maintain the flow in case the main outlet became blocked.

Outflow from the pond normally stops in late summer, beginning again after the rains begin in the fall.

The problem at the facility

The problem started where the trash rack protecting the outlet control structure was being dammed by beavers.

Since construction of the facility, the trash rack protecting the outlet control structure was dammed repeatedly by beavers. Maintenance crews had not been able to keep the outlet clear. The submerged bypass pipe had also become plugged. This blocked any possible fish passage and caused water to back up in the pond to close to the point of overflow. King County received notification from the Washington State Department of Fish and Wildlife (WDFW) and the Department of Ecology Dam Safety Office that the beaver dam needed to be removed.


Although the Peterson Pond beavers had demonstrated their ongoing commitment to damming the pond outlet, the local residents strenuously objected to any removal of the beavers. In September 2000, the beaver dam was removed, and the submerged pipe was cleaned so as to function properly. Maintenance crews were instructed to monitor and remove any debris while Stormwater Services staff determined a long term solution that met the concerns of the Swan Lake Estates residents, Washington State agency staff, and also King County stormwater facility maintenance requirements. By Spring 2001, the persistent beavers were winning the battle and the outlet was again completely blocked.

During this time, the King County Wildlife Program was working with the Humane Society of the United States (HSUS) and Mr. Skip Lisle to sponsor the "Solving Conflicts with Beaver" workshop to be held in King County. Stormwater Services staff approached Dr. John Hadidian from HSUS and Mr. Lisle about the possibility of constructing a "beaver deceiver" facility at Peterson Pond. Mr. Lisle and Dr. Hadidian both agreed with enthusiasm that the "beaver deceiver" concept that Mr. Lisle had developed was appropriate for the Peterson Pond site.

Permits required for the project included a Hydraulic Project Approval (HPA) from the WSFWS and a Clearing and Grading permit from the King County Department of Development and Environmental Services. The residents of Swan Lake Estates were also notified and supported the project.

The beaver dam, woody debris, and mud were removed from the trash rack before installing the beaver deceiver. The dam was removed a couple of days prior to the scheduled installation day to allow the water level in the pond to drop to normal levels. Because the water depth at Peterson Pond was relatively deep for this type of device, decreasing the water level helped with the installation. However, the pond was not drained, and some work was done from small boats.

Because small beavers might fit through the metal railing that was along the trash rack, additional fencing material was added along the length of the railing. Most installations will probably need some additional measure like this to prevent beavers from getting branches and other material around the landward side of the fence and into the culvert or other structure being protected. In addition, steel wire was stapled to the corner posts and the braces to prevent beavers from chewing through them in the unlikely event that one should get inside the structure. 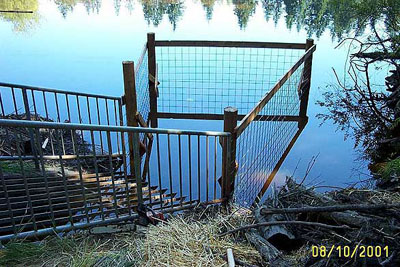 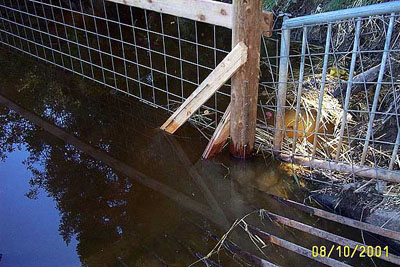 King County monitors the facility to ensure the structure functions as intended.

A PDF version of this information plus additional photos showing the entire construction process can be found here.