Himalayan blackberry is a thorny, thicket forming shrub in the Rose family that produces large, edible blackberry fruits. Leaves are somewhat evergreen, divided into 3-5 leaflets (palmately compound) that are rounded (ovate) and have toothed edges. Flowers are in flat-topped clusters of 5 to 20 flowers, each with 5 petals, white to light pink, about 1 inch in diameter. Stems (canes) can grow 20 to 40 feet long and 13 feet tall, root at the tips when they touch the ground, and have stout, hooked, sharp prickles with wide bases.The plant creates dense thickets that are impassable and sprawls over surrounding vegetation. It has large, deep, woody root balls that sprout at nodes.

Himalayan blackberry is a Eurasian species introduced for fruit production that is highly invasive and difficult to control. It forms impenetrable thickets, spreads aggressively and has significant negative impacts to native plants, wildlife, recreation and livestock. Due to the deep roots, digging up large established plants is difficult and may need to be repeated if not all the roots are removed. Repeated cutting can help keep the plants from overtaking over vegetation. Contact the noxious weed program for advice on control methods or see below for more resources. 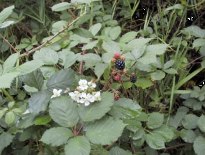 Although control of Himalayan blackberry is not required, it is recommended in protected wilderness areas and in natural lands that are being restored to native vegetation because of the invasiveness of these species.

Identification (see below for additional photos)

Himalayan blackberry out-competes native understory vegetation and prevents the establishment of native trees that require sun for germination such as Pacific Madrone, Douglas Fir and Western White Pine. Dense, impenetrable blackberry thickets can block access of larger wildlife to water and other resources (not to mention causing problems for people trying to enjoy parks and natural areas). 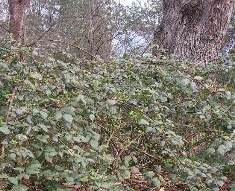 In an invasive weed survey of the relatively pristine Middle Fork Snoqualmie Valley, Himalayan and evergreen blackberry covered more area than all of the other invasive species combined. Similarly, in EarthCorps' Seattle Urban Nature’s plant inventory of Seattle’s public forests, Himalayan and evergreen blackberry were found to be the most invasive species in Seattle's forests. 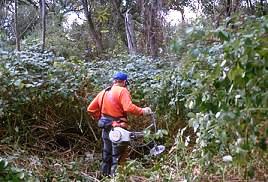 Blackberry can be controlled by digging, mowing, herbicide, plowing, and/or livestock grazing (especially goats). Removal of top growth by mowing, cutting or grazing with goats will eventually kill blackberry if done regularly and over several years. Cutting followed by digging up root crowns is much more effective than cutting alone. Blackberry can be controlled with herbicides, but product labels should be followed carefully - different products need to be used at different times and may pose different risks to the user and the environment.

Make sure to have a long-term plan to ensure success, protect native and beneficial species while doing the control, and start in the least infested areas first and then move into the more heavily infested areas.

Consider replanting the area with native plants well-suited to our local climate and soil conditions that will also provide benefits to our local ecosystems.  See King County's northwest native plant guide for suggestions.

What to do if you find this plant in King County, Washington

Because Himalayan blackberry is so widespread, property owners are not required to control it and we are not generally tracking infestations.  We can provide advice on how to control blackberry, but there is generally no requirement to do so, unless the city or homeowners association requires it.