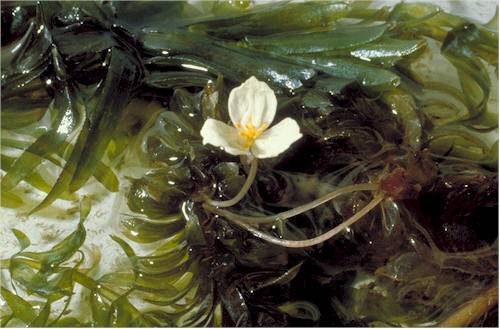 Egeria, also known as Brazilian elodea or Egeria densa, is a submerged freshwater perennial plant that forms dense stands in still and flowing waters up to 20 feet deep. It can also create dense, floating mats along the water's surface. Apparently smooth-edged leaves grow in whorls, making a cylindrical shape, with 4-7 leaves per whorl. Spring to late summer, the plant produce small, white, 3-petaled flowers that float on or rise above the water's surface on thread-like stems. Identifying egeria can be tricky, so be sure to get an expert to confirm the species before planning any control measures.

Egeria might be confused with a native water plant called elodea or common waterweed (Elodea canadensis). However, Egeria's stems look very leafy compared to those of the native elodea, and the native elodea has only 3 leaves in a whorl, instead of 4-8 like egeria.

This noxious weed is a submersed, freshwater perennial plant found in both still and flowing waters including lakes, ponds and quiet streams. Egeria tends to form dense monospecific stands that can cover hundreds of acres.

Native to Brazil and Argentina, egeria is a popular aquarium plant often sold in pet stores and available in school science kits under the name Anacharis. When it is introduced into freshwater, it forms dense beds that reduce water quality and impede recreational activities. It is illegal to sell this plant in Washington State.

What to do if you find this plant in King County, Washington

Please notify us if you see egeria growing in King County. Our program staff can provide the property owner or appropriate public agency with site-specific advice on how best to remove it.  We map all known locations of regulated noxious weeds such as egeria in order to help us and others locate new infestations in time to control them.