Tools for evaluating and identifying landslide hazards are continuously evolving. A review of technical literature and consultation with subject matter experts were used to identify and use the most current and appropriate methodologies for the various types of landslide hazards identified in the study. The mapping methods selected were appropriate for mapping at a landscape scale. More accurate assessments of the potential for landsliding at a specific location are possible based on site-specific investigations and assessment methods that account for site-specific conditions.

The advent of LiDAR and the data and imagery derived from it have revolutionized landslide mapping over the last decade. The topographic data generated from LiDAR shows the ground surface topography at a resolution unattainable with any other imaging technology. Remote detection of subtle yet important topographic features, even where covered by mature forest, is possible by visual inspection of LiDAR-derived hillshade images, as seen in the figures below. In addition to LiDAR imagery, geologic maps prepared by the U.S. Geological Survey and by the Washington Department of Natural Resources were utilized (see Map References in Section 8.0 – References of report).

Many features of deep-seated landslides share similar topographic characteristics including steep, often arcuate head scarps defining the upslope limit of the slide and a distinct deposit of displaced debris downslope. The debris was often identifiable by its lobate form and hummocky upper surface. These features varied in their topographic distinctness from features that appeared sharp and unambiguous to features that were muted and subtle. It is likely that some features mapped as slides based on their topographic character may have formed in other ways and it is also likely that some prehistoric deep-seated landslides present in the study limits were not identified because they were not distinguishable with the available imaging.

The landslide features identified by Shannon & Wilson, Inc. following the DOGAMI method are noted in the figure below. 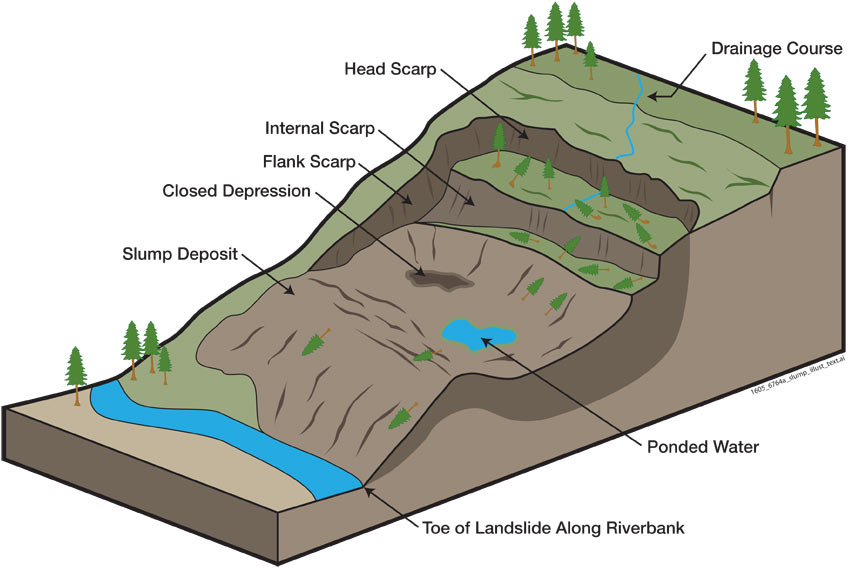 A numerical confidence rating method set by the DOGAMI method (e.g., headscarp and slide morphology) was used to assign ratings to each mapped landslide. Twenty attributes, i.e. relative age of landslide, LiDAR source and date, and whether the slide appeared natural or human modified, of each landslide, were documented. 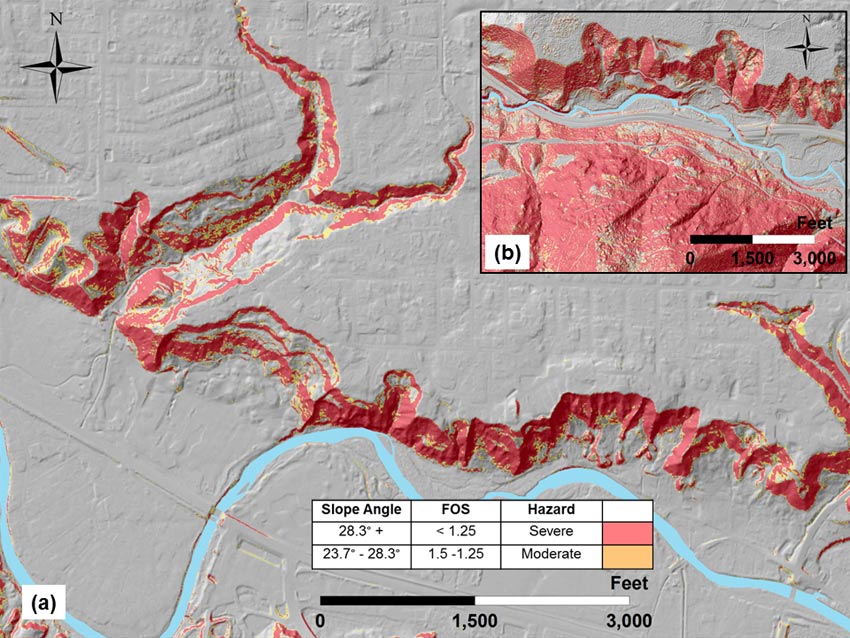 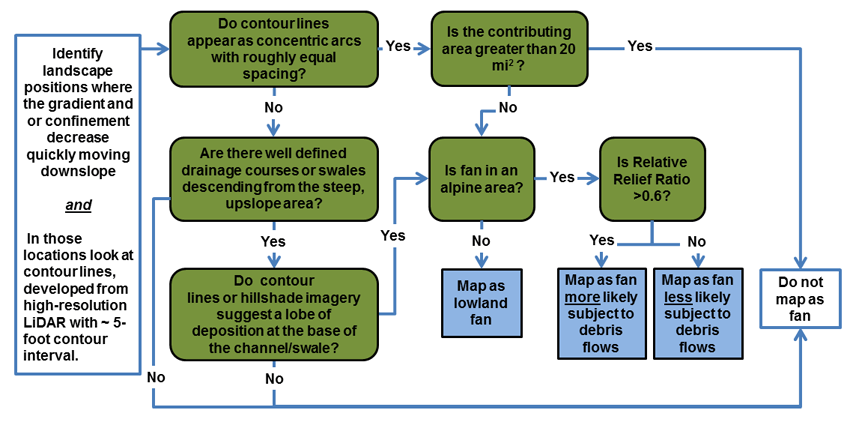 Identifying fans
A depositional fan is physical evidence of the extent of past debris deposition, and these features often are indicators of future inundation. These depositional fans tend to be relatively low-gradient and are not readily apparent from hillshade imagery (see left figure below). However, when looking at closely spaced (5-foot) contour interval lines derived from high resolution, LiDAR-derived topography, the conical shape of a fan is more clearly evident. The figure below on the right shows an example of the closely spaced contours and LiDAR imagery used for this mapping method.


Another distinguishing characteristic of both alluvial and debris fans is that they form where sediment deposition occurs where there is an abrupt change in gradient from a steep source area upslope to a lower gradient receiving area below. Most fans are associated with a topographically distinct drainage channel that joins the fan at its apex. Fans created by rock fall or raveling may not have a contributing channel. It is common for the channel to be significantly incised into the fan where it crosses the fan surface. This sort of incision may indicate that the fan is a relict feature from some prior climatic/landscape regime (immediate post-glacial time, for example). In this report, all fans including those with incised channels are mapped unless the magnitude of the incision precludes all plausible channel relocation.

Puget Lowland fans
No simple metric was identified in the literature that could be used to screen lowland basins and identify those most likely to be inundated by such debris flows. A review of sites with known recent debris flows or debris floods in the Puget Lowland areas of King County suggests that they share some characteristics in common:

These observations are based on a small number of recent incidents, which is not enough to develop robust screening criteria. Based on the characteristics above, DNRP geologists used LiDAR imagery and closely spaced contour lines to map depositional fans in the Puget Lowland areas.

Alpine fans either more or less subject to debris flows
Research in British Columbia has identified a simple landscape metric that identifies alpine drainage basins that are more likely to produce debris flows (Wilford et al. 2009). This metric is variously known as the Relative Relief Ratio (used here) or the Melton Ratio (see figure below). The ratio increases with the elevation range of the basin and decreases with the square root of the basin area. The ratio will therefore be greatest for small basins that span a large elevation change. Research in British Columbia has shown that basins with a Relative Relief Ratio of 0.6 or more are more likely to produce debris flows, and that fans with a Relative Relief Ratio less than 0.6 are more likely to produce debris floods or normal fluvial flooding (Wilford et al. 2009). 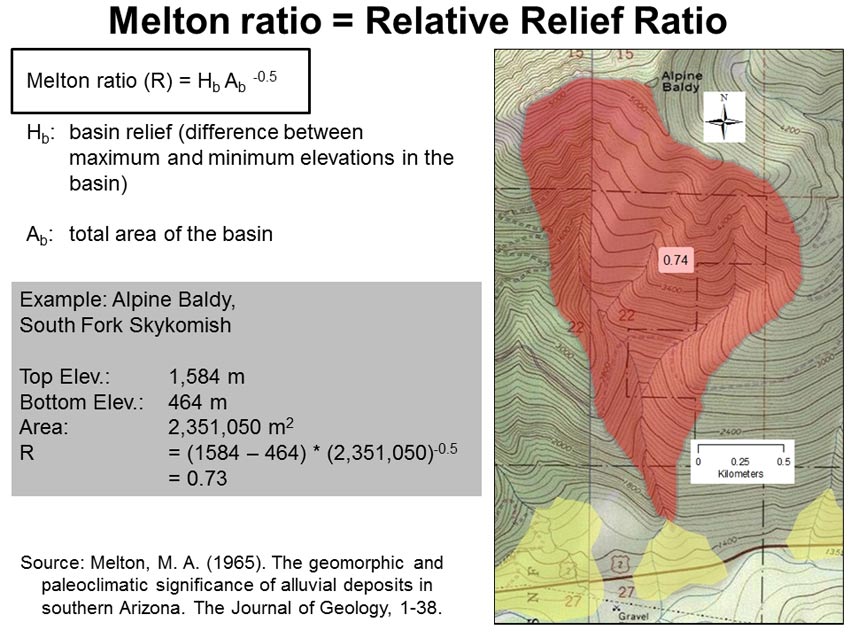 The CONEFALL software program was used to implement this approach in a GIS environment to map areas where rock fall could propagate downslope from a source. As a starting point for the CONEFALL program, cliff-faces were identified to delineate the line representing the base-of-cliff/top-of-talus. Within the study limits, these lines were mapped based on professional judgment using a variety of tools in a GIS environment including vertical orthophotography, oblique photography, and slope mapping. Slopes inclined at more than 200 percent were especially identified.

An example of the output from CONEFALL for the Mt. Si area is shown in the figure below, where boulders are mostly mapped within the CONEFALL modeled area around the base of Mt. Si. It is important to note that the integrity of the bedrock was not considered in this model. 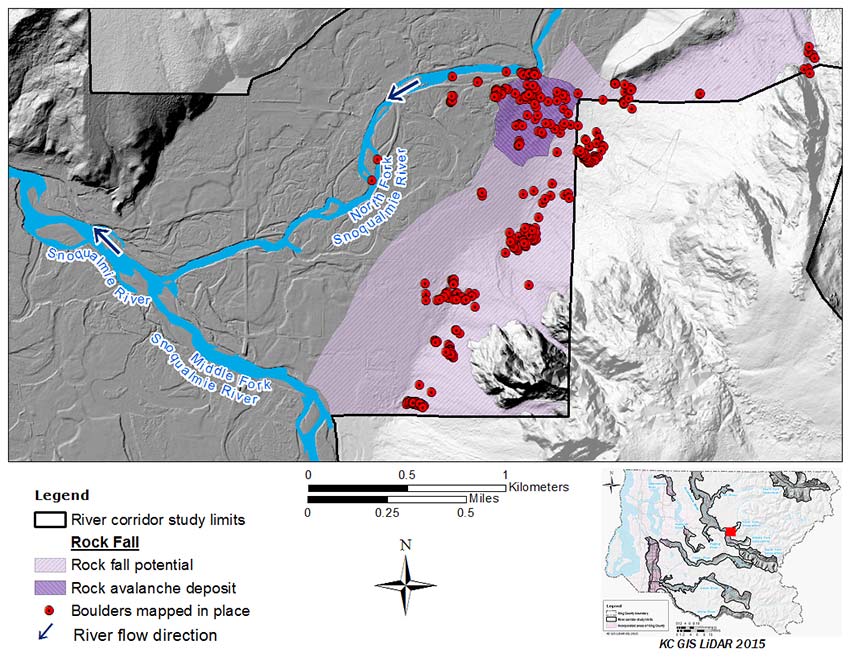 This figure shows an example of the output from CONEFALL for the Mt. Si area where boulders are mostly mapped within the CONEFALL modeled area at around the base of Mt. Si. It is important to note that the integrity of the bedrock was not considered in this model.

Rock avalanche deposits were identified within the study limits using USGS geologic maps, review of LiDAR imagery, interpretation of orthophotography, field investigation, and geotechnical reports. The figure below is an example of a rock avalanche deposit mapped in the South Fork Skykomish River valley. Due to the lack of detailed information on significant variables including rock strength, zones of weakness and joint patterns, predictions of future sites of rock avalanches were not feasible. 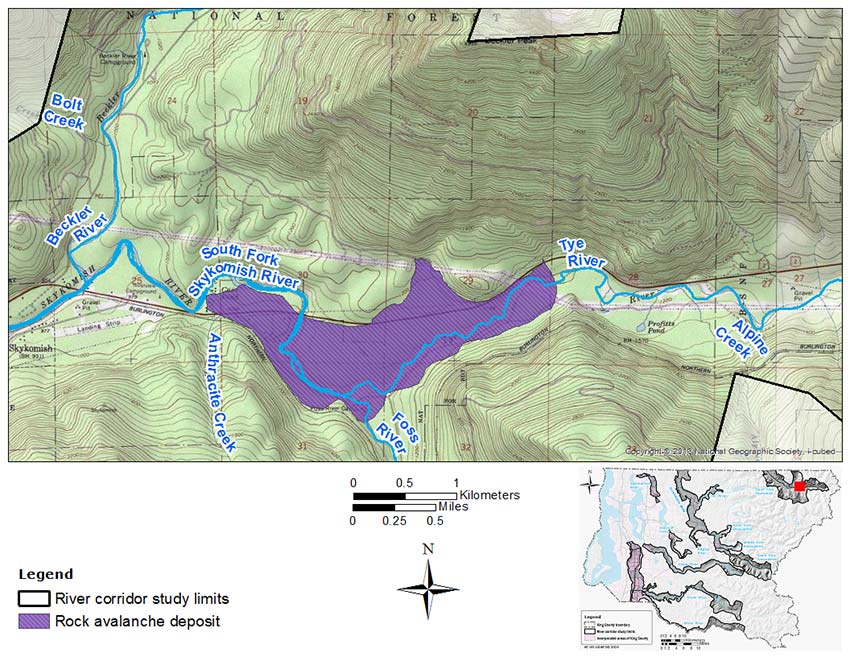