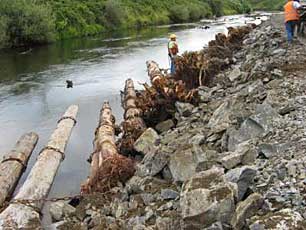 Example of large wood placement on the Green River

The purpose of these rules is to implement Ordinance 16581 that was adopted by the King County Council in 2009. The ordinance directs the King County Department of Natural Resources and Parks (DNRP) to prepare a public rule establishing procedures that DNRP will use to consider public safety issues when designing projects that involve placing large wood in King County rivers. The rules also identify the procedures for public input on projects that will utilize large wood elements in the design.

Following a 45-day public comment period and thorough review and consideration of comments submitted by the public, the DNRP adopted a Final Rule on March 31, 2010.

Comments received from the public

King County Code (chapter 2.98) gives county agencies the general authority to adopt rules and sets out the minimum procedural requirements for public review and comment during development of the rules. When a department intends to adopt a public rule a Notice of Intent to Adopt Rules is published in King County’s officially designated paper of record, the Seattle Times, and the proposed rule is posted on the DNRP Web site. Any member of the public can comment on the proposed public rule within a 45-day comment period. After considering the comments, DNRP can adopt the public rule by signature of the department director. The rule becomes effective 30 days after filing the rule with the Clerk of the King County Council.