As your Metropolitan King County Council, we oversee the second largest government and the most populous county in Washington State. With over 2.25 million residents, King County is the 13th largest county in the United States in terms of population. There are more people living in King County than in 15 states! At 2,130 square miles, the county covers more territory than the states of Rhode Island or Delaware.

Our dedicated employees provide quality regional services every day to county residents. We are also the local government for approximately 249,000 people who live in unincorporated urban and rural areas, and we provide services by contract to many of the county’s 39 cities.

As the legislative branch of county government, the Council sets policies, enacts laws, and adopts budgets that guide an array of services, including:

Each of the nine members of the King County Council represents a geographical district of about 244,000 residents. Councilmembers are elected on a non-partisan basis and serve four-year terms. The Councilmember must live in the district he or she represents.

The Council has several standing committees that oversee specific functions of county government and a Committee of the Whole that includes all Councilmembers. They also work closely with other elected officials from local jurisdictions on three regional committees that address common interests in matters of policy, transit, and water quality.

Councilmembers also serve as the Board of Supervisors for the King County Flood Control District, a special-purpose government established by the State Legislature. Additionally, individual Councilmembers serve on a variety of external committees, boards, and commissions, such as the Board of Health and  the Sound Transit Board.

The Council’s review of ordinances, motions, and budgets help ensure that county government operates in an efficient, transparent, and cost-effective manner, with equal access for all county residents. 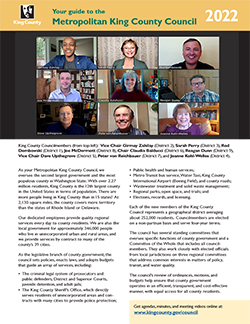