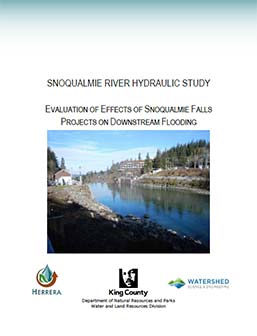 The Snoqualmie River Hydraulic Study: Evaluation of Effects of Snoqualmie Falls Projects on Downstream Flooding (“Phase 1 Study”) is the first phase of the Snoqualmie River H&H Study, and was completed in April 2016 following a series of public meetings. The study was primarily conducted to respond to the concern expressed by many lower Snoqualmie Valley residents that recent severe flooding was aggravated by two large upstream flood reduction projects that were constructed between 2004 and 2012 (Army Corps 205 project and PSE Snoqualmie Falls project). The Phase 1 Study also evaluated the upstream benefits of the projects to the City of Snoqualmie. The study generally confirmed earlier analyses, showing an increase of 0.1 feet to the peak 100-year water level downstream of the Falls, and a decrease of 1.4 feet upstream in the City of Snoqualmie. 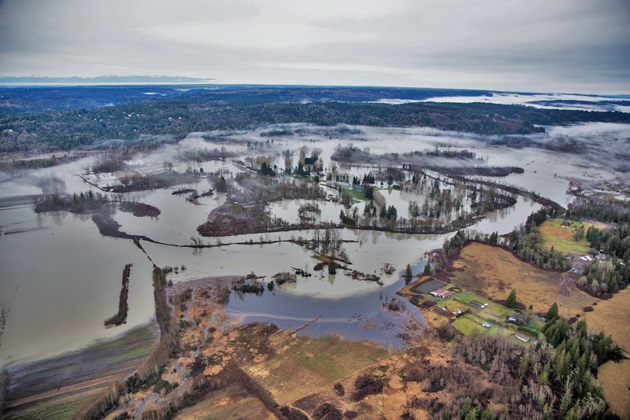 The study was independently conducted by Watershed Science & Engineering on behalf of King County. An independent technical review of the study was conducted by Dr. Ed McCarthy on behalf of Snoqualmie Valley residents and stakeholders to ensure the integrity of the data and validity of the results, and that the study would meet the needs of the community in understanding changes in flood risk associated with the projects.

The study found the projects had a large upstream benefit and much smaller downstream impact. The study’s modeling found the Snoqualmie 205 Project reduces 100-year flood water surface elevations in the City of Snoqualmie by about 0.45 feet. The PSE project further reduces water levels in the City of Snoqualmie by about 0.96 feet, for a combined total of 1.41 feet of flood stage reduction for a 100-year flood. The amount that downstream water levels increase in a 100-year flood event is a maximum of 0.09 feet (a little over one inch) with a modeled impact from the 205 Project of 0.02 feet and a modeled impact from the PSE project of 0.07 feet. The amount of impact is similar for a range of flood magnitudes (2-year to 100-year) and is generally about 0.5 to 1.25 inches for the two projects combined. The effects of the projects decrease downstream of the falls and are negligible by Duvall. Modelling also showed that the 100-year peak arrives in the lower Valley about 20 minutes earlier as a result of the projects. 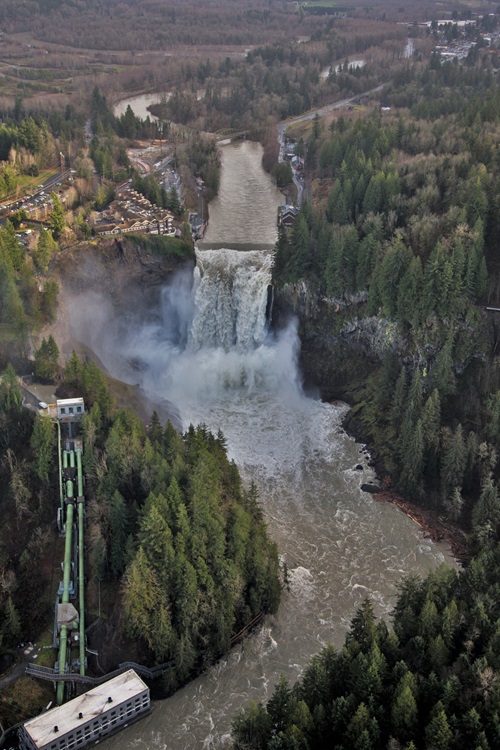 The study area is the Snoqualmie River Valley from approximately river mile (RM) 6.0 to 42.0, starting from the King County/Snohomish County boundary to the confluence of the three forks of the Snoqualmie River (upstream of the City of Snoqualmie). The intent is for the upstream study extent to include all areas where flood stage has been reduced by the projects and where loss of flood storage could have a measurable effect on areas downstream of the projects. Historically, Snoqualmie Falls and the segment of river just upstream has created a natural “bottleneck” that constricts flow, causing deep and broad flooding upstream in the City of Snoqualmie. The Snoqualmie 205 Project and PSE Project reduced the flow restrictions in this bottleneck area, decreasing flooding damages upstream of the falls. The Snoqualmie 205 Project was completed in 2004 by the Corps of Engineers, King County, and the City of Snoqualmie. PSE’s project was completed in 2012.

The Snoqualmie 205 Project was expected to reduce flood depths by more than one foot in the Snoqualmie area, where more than 600 homes and historic downtown Snoqualmie are subject to severe flood damages. It was also expected to cause a much smaller but not negligible increase to the depth of flooding downstream. At the time of the project, and in response to community concerns of the potential for increased flooding in the lower Snoqualmie Valley (the area from the base of the falls to the county line north of Duvall), the Downstream Assistance Program was developed. This voluntary program provided a cost share to help landowners reduce their risk of flood damage by elevating their flood-prone homes or barns. This assistance was offered to all property owners in the Snoqualmie valley floodplain below the falls. Six landowners participated in the program.

Both projects were designed to reduce flood levels upstream in the City of Snoqualmie, but were acknowledged to cause at least limited impacts downstream in the lower Snoqualmie Valley. At issue has been whether these impacts are greater than originally determined and communicated prior to construction of the projects. This evaluation assesses the degree of benefits and impacts attributable to the projects due to improvements in local flood conveyance and reduction of flood storage in the reach of the Snoqualmie River just upstream of the falls.

A broader investigation into a variety of issues related to flooding changes is included in the second phase of the Snoqualmie River H&H Study. The scope of work for the Phase 2 study was largely based on public feedback received over the last several years about flooding changes in the Snoqualmie Valley. Based on comments received at a public meeting on the Phase 1 Study in March 2016, the Phase 2 Study scope was expanded to include a greater investigation into sedimentation and gravel accumulation and how this affects flooding.