The King County Flood Control District launched the Willowmoor Floodplain Restoration Project in the Sammamish River Basin in January 2013. Located in Marymoor Park near the outlet of Lake Sammamish, the project seeks to address a number of flood control and habitat issues related to the Sammamish River Transition Zone.

The Transition Zone is a 1,500-foot, rock-armored channel that connects Lake Sammamish with the Sammamish River. It was built by the U.S. Army Corps of Engineers in 1964 as part of a larger Sammamish Valley flood control project. The channel provides lake level control to Lake Sammamish as well as downstream flood risk reduction for the City of Redmond and other communities. It is also an extremely important ecological area for Chinook salmon and other fish and wildlife species. Over the years, King County and the Corps planted willows along the Transition Zone to improve habitat for salmon, including Chinook, listed as threatened under the Endangered Species Act.

In 2010, after several springs with record rainfall, lakeshore owners noted higher lake levels, and an analysis found the Transition Zone’s outflow had decreased over time. To address homeowners’ concerns, the County launched a vegetation management plan and began trimming the willows. But that, in turn, harmed salmon habitat. It also resulted in the County facing high mitigation costs.

Following development and evaluation of conceptual design alternatives and a public engagement process, the Flood Control District selected a preferred alternative (described below) to solve these interrelated problems. The goal is to reconfigure the Transition Zone so that it continues to provide necessary lake level control, flow conveyance, and downstream flood risk reduction and reduces the frequency and duration of high winter and spring lake levels. At the same time, the project would improve river and adjacent wetland habitat conditions for Chinook and other fish species, address water temperature conditions, and reduce the County’s high maintenance and mitigation costs.

In April 2018, King County, as service provider to the Flood Control District, initiated additional technical studies to support preliminary design of the preferred project alternative. The plan is to complete a draft 30 percent design by the end of 2018. An archaeological study of the proposed project footprint will be used to refine the design, which will go before the Flood Control District to determine next steps. Public outreach and engagement will also continue to occur.

Historically, the Sammamish River meandered through a wide swath of valley bottom wetlands, which provided natural flood storage. From the early 1900s through the mid-1960s, the river was straightened and riparian wetlands were filled by a series of drainage district projects. In 1964, the U.S. Army Corps of Engineers formalized these efforts through the Sammamish River Flood Control Project – a nearly 14-mile long project from Lake Sammamish to Lake Washington to provide flood protection to the Sammamish River valley. The project widened the river channel and deepened it by up to six feet in some areas. The Corps constructed the Transition Zone to connect the old river channel near the lake’s outlet to the newly deepened channel downstream.

At the upstream end of the Transition Zone, a concrete weir controls lake outflow, maintaining minimum summer lake levels. A narrow notch in the middle of the weir provides upstream and downstream passage for Chinook salmon and other fish species via the low-flow channel. At most flows, the notch in the weir also allows passage for small boats, such as canoes and kayaks. During high lake outflows, flow control shifts from the weir to the Transition Zone. Overall, these efforts have been successful in limiting flooding in the Sammamish River Valley. In addition, the project has reduced the incidences of high and low lake levels.

Over the years, however, increased density of the vegetation paired with backwater effects from Bear Creek have decreased the Transition Zone’s effectiveness at providing lake level control for extreme high flow events. By agreement with Lake Sammamish property owners, King County crews now annually maintain the Transition Zone, trimming the willow buffer and mowing the grass on the floodplain to increase the Transition Zone’s conveyance. This ongoing maintenance, however, degrades habitat for fish and results in the need for costly mitigation. Threats to salmon are compounded during the summer by warm water from the Lake Sammamish outflow and in the slow-moving Sammamish River.

In 2013, King County’s project design team developed a series of design alternatives to address the project goals. Public engagement – including the creation of a Stakeholder Advisory Committee, which met nine times over the course of two years – was a significant element of the design process. The identification, development, refinement, and elimination of alternatives were based on their performance relative to a suite of design objectives, the results of preliminary technical studies, and guidance and feedback from the Stakeholder Advisory Committee.

The design alternatives were initially developed as two separate categories:

During several iterations of review and refinement, some alternatives from each category were eliminated from consideration, while those determined to have the best potential were carried forward. Ultimately, the two most promising channel reconfiguration alternatives were combined with the two most promising cold water supplementation alternatives, resulting in two integrated alternatives: widening the existing channel and adding a surface water heat exchange and a split-flow channel plus pumped groundwater.

These two integrated alternatives, along with a “No Action” alternative, were reviewed to determine a preferred alternative to be advanced for final design and construction.

Following are links to graphical depictions of each of these design alternatives (for help with PDF files, visit our Acrobat Help page):

The Flood Control District reviewed these design alternatives, as well as public, agency, and tribal comments about the alternatives, and in 2016 selected the "Split Flow Channel + Pumped Groundwater" alternative. This design will create a new side channel that meanders across the floodplain on the southwest side of the existing river channel and is connected to the main channel upstream and downstream of the Transition Zone. Flow in the new side channel will include a portion of flow from the main channel and flow from the Tosh Creek tributary and could be augmented with pumped groundwater from a new well. The project team has hired a consultant to bring the project to draft 30 percent design by the end of 2018. 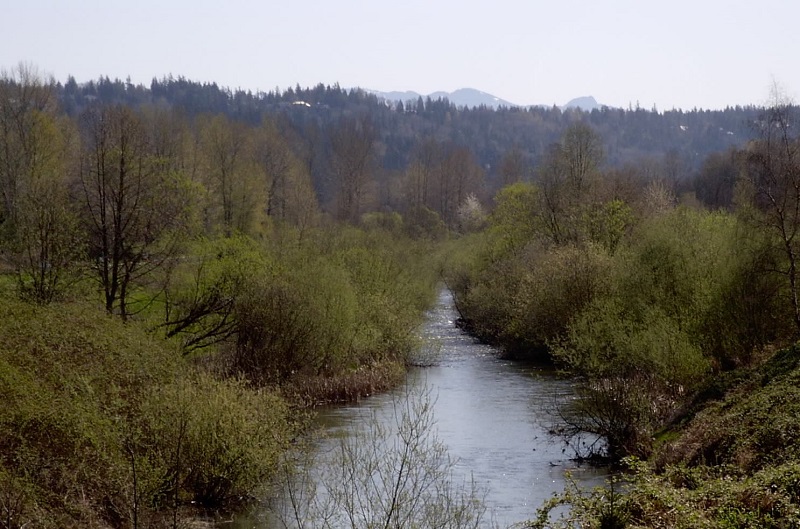 A view of the Transition Zone.