This is a fitting dedication because it recognizes that many people made it possible. Ten years ago this concrete and steel was a will-o-the-wisp and these miles of great tunnels and pipe were a fragile idea. It took many people to spin that idea into a concept and many more to transform that concept to this site.

The bridge to this time and place was not built by power, nor by wealth, nor an established elite. In plain truth, it was built by the citizenship of people no larger than ordinary life. At the start of their work they were a handful of citizens looking for something better for their city. Civic organizations brought them together and gave a base of support and continuity. They met at noon at the Y.M.C.A. like hundreds of committees before and since. They wrote reports that provoked concern—they stirred official thinking—they drew an enabling statute. There is something both commonplace and unique in the fact that they tackled such a big job and that they succeeded.

These were people who left their rest or pleasure to work for something that seemed a long way off and sometimes beyond their reach. They were looking for a way to protect all of the waters of this basin for all time. Behind them was a deep-seated history of separate waste disposal by independent agencies. They knew that it would be difficult and costly to reverse this course and that the first results would be at least ten years away. There was a strong temptation to settle for fast, low cost, stop-gap measures. Borrowing a phrase from Omar Khayam, it would have been far easier to "take the cash in hand" and forget the "brave music of a distant drum." The names of Kirkland's Albert King, Bellevue's John Henry and Lake City's Robert Beach characterize the roster of more than a dozen men and women who began to spin this long civic thread. Without exception, they spurned the short term cash, looked well into the distance and set their sights for the next generation.

The Municipal League and the League of Women Voters are a favorite target for the cocktail critics and the lampoon merchant—but pound for pound their members can outfight and outlast their detractors. When the research and reports are done and the time for action comes along this element of toughness can make the difference.

In 1957, action meant the passage of major legislation. There was leadership from men like Governor Rosellini, Senator Grieve and Representative—now Governor—Evans, but the force of the citizen movers was decisive in Olympia. They were better organized and more determined than their opposition and the Metropolitan Municipal Corporations Act became law. The roster of citizen activists grew and the names of Alec Bayless and Joel Pritchard exemplified the fusing of partisan loyalties for the public good.

In 1958, action meant waging two major campaigns. The first election was the kind of defeat which would have sent any fair weather citizen back to TV watching-but the Metro people came back to raise money again, to speak again to every group which offered a platform, to doorbell the area with a march by 5,000 mothers. And they won. It was the last of a series of make or break tests before the clean waters program could even begin. By this time the civic roster was large and the names of Madeline Lemere, Richard Riddell, Williamena Peck, Dr. Clayton Wangeman, Dorothy Block and Morell Sharp were a few of many we honor with this dedication.

In 1959, citizens passed their torch to officials. County commissioner Bill Moshier, Renton Mayor Joe Baxter and Seattle Mayor Gordon Clinton exemplified commitment to the Metro ideal at the sacrifice of personal welfare and political fortunes. Carey Donworth carried his civic dedication into the chairmanship of the Metropolitan Council. L. R. Durkee backed his faith in the area with federal advances to speed this regional experiment-a faith justified by Metro's repayment of every dollar. Frank Kersnar typified the high skill and extra effort which professional engineering gave to this project. Finally, Harold Miller exemplified the dedication of the Metro employee by giving his administrative talent and finally his life to perform this mission.

Success of the project

This civic thread was a long time spinning but now the results can be seen. The trust given by civic activists to officials and professionals has been well kept. The difficult project will be completed ahead of schedule and within the estimated cost. The waters Metro was designed to save are being restored.

I can't help wishing that each man and woman who played a part were here... I wish they could pause to share a minute of pride in the job they started and to see that the promises have been kept.

I can't help wishing that each man and woman who played a part were here—each member of the League committee—each person who gave money on faith—each officeholder who risked his image—each woman who phoned or mailed or marched—each speaker who stirred an apathetic group or gave the lie to gossip—in short, each citizen who did his duty. I wish they could pause to share a minute of pride in the job they started and to see that the promises have been kept.

There is, of course, no magic in Metro. With all its noble purpose and great scale it is a very human effort. Mistakes have been and will be made. But every man and woman who works for Metro should know that the eyes of many are on this experiment. Metro must set an example of quality performance to match the quality of its physical plant.

There is no miracle of harmony in Metro. There are still gaps in the grand design for the basin. Provincial pride has not lost its bite and special advantage still seeks its limited ends. Nevertheless, a joint effort of more than 26 local governments has, in fact, worked. The validity of the common goal has produced many adjustments of old conflicts. Within the original boundaries of Metro every unit of government which operates sewers has voluntarily joined the system.

There is no utopia in Metro. Divisions of loyalty have slowed its pace and blurred its image. But this experiment was not created in an ideal vacuum. Metro walks a tightrope between fragmented local anarchy on one hand and an all-powerful centralism on the other. In plain fact, it has proved that a federation of cities can perform a common task well and without swallowing each other.

Without achieving a miracle or utopia, Metro has nevertheless brought its civic activists some satisfying rewards. It has demonstrated the great potential of local initiative in the federal-state-local framework. Metro has proved the value of taking a fresh look at a physical problem, above prejudice, across boundaries and beyond existing systems. In a time of explosive development Metro has a core system ready today to take care of the unexpected. Metro has pulled along the foot-draggers and the fault-finders and has confounded the dire predictions of the imported literature. The project has been nationally honored as an engineering feat. Metro's creation has also been recognized as an achievement in intergovernmental relations.

For many, however, the clearest satisfaction lies in proving the compatibility of an urban community with its natural setting. Ten years is a short day in the life of a great city. We are transients on these hills and shores and the waters are not ours to spend. Ten years ago the urban drainage basins of the nation were heavily polluted. Today most of these waters have gone from bad to worse—but not here. Today most of the nation's press are looking for scapegoats—but not here. Today most local councils are still waiting for someone else to do it—but not here. Here we dedicate substantial completion of the largest single pollution abatement project ever undertaken. Here we watch a welcome turning point in the story of our lakes and rivers and inland sea. Here we mark some proof that urban man can live and work in a beautiful land without destroying beauty.

This is not the dedication of a project for its own sake. Nor simply the honoring of deserving men and women. It is rather a dedication to a quality in man—the quality of the long look and the will to serve.

This is a fitting dedication. But will it be heard where it must be? This is not the dedication of a project for its own sake. Nor simply the honoring of deserving men and women. It is rather a dedication to a quality in man—the quality of the long look and the will to serve. The pollution of these waters will be stopped but what of smog, traffic, blight and the ghetto? Will they continue to be compounded by selfishness and prejudice or be left once too often for someone else to solve? Will short term cost and present gain be the length of our view of the urban destiny of this lovely country? Or, perhaps, will some young man or woman, following a thread from this dedication, listen for and heed the brave music of the distant drum. 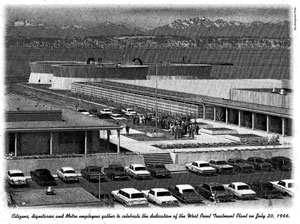 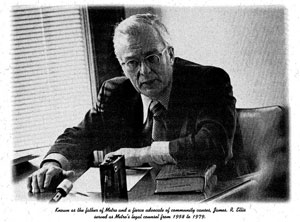 Known as the father of Metro and a fierce advocate of community causes, James R. Ellis served as Metro's legal counsel from 1958 to 1979.
(Click photo for larger view.)

Better than promised: an informal history of the municipality of metropolitan Seattle, 1995